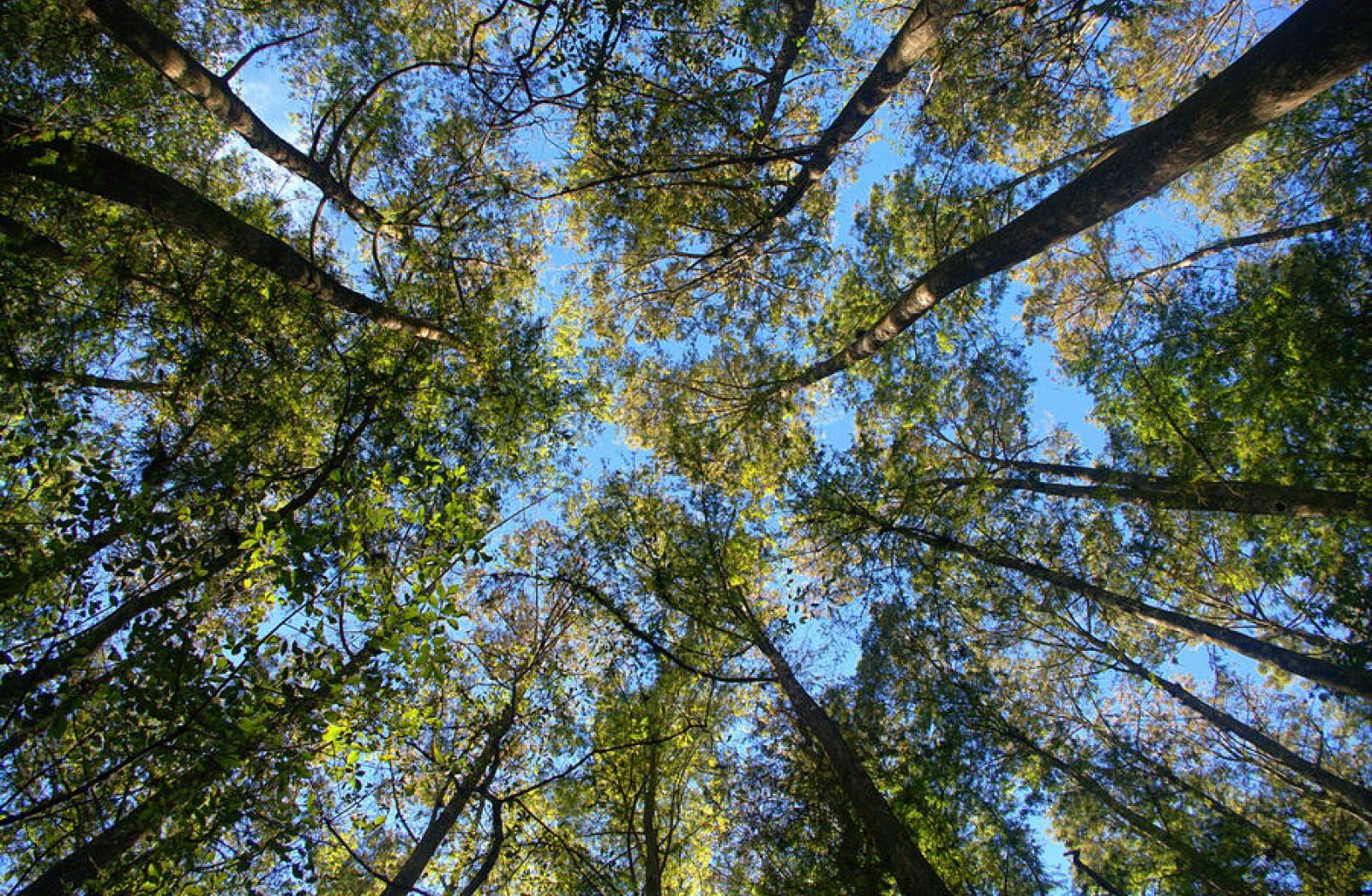 In 2014, DEP took enforcement action against South Palafox Properties, LLC., revoking their permit for the Rolling Hills construction and demolition (C&D) debris disposal facility located at 6990 Rolling Hills Road, Pensacola, due to compliance issues. The compliance issues included failure to apply soil cover, elevated levels of hydrogen sulfide (H2S) emanating from the facility, impacts to groundwater and surface water, and disposal of unauthorized waste. South Palafox petitioned the department’s action, and the case went before an administrative law judge. The administrative proceedings resulted in the issuance of a Final Order of Permit Revocation in May 2015. South Palafox was required to close the facility in accordance with state regulations.

South Palafox ceased operation of the facility, but failed to properly close it as required. Florida law provides specific technical requirements for closure to minimize infiltration and erosion, ensure the long-term integrity of the closed facility and minimize potential future environmental impacts. DEP took the necessary steps to secure the facility’s financial assurance – which is required to obtain a permit – and took over the closure of the facility. Through a competitive bid process, the department secured a contractor to perform the closure which began in late 2016.

The department executed a task assignment for the completion of final closure of the Rolling Hills Construction and Demolition Debris Facility in June 2019. In accordance with that task assignment, final closure of the Rolling Hills C&D facility is now substantially complete. All construction work on the waste disposal cell is complete. Remaining items are related to a stormwater conveyance swale on the site. Near completion of the project, Pensacola Energy requested a minor design change to adjust the location of a section of a stormwater conveyance swale to minimize encroachment into the existing utility easement. The department has requested that Pensacola Energy preform a survey to identify the easement prior to completing construction. Once the survey has been completed by the utility, the department’s contractor will return to complete construction of the stormwater conveyance swale which is part of the overall stormwater management design for the site.

The department continues to closely monitor the site to ensure site stabilization and the integrity of the closure. Below are photos of the site taken during the department’s site visit on December 11, 2019.

The department conducted an on-site groundwater sampling event at the facility on March 1, 2019. Compared to previous monitoring data, some concentrations had increased and others had decreased. Overall, the most recent results were consistent with the previous groundwater data from the site. 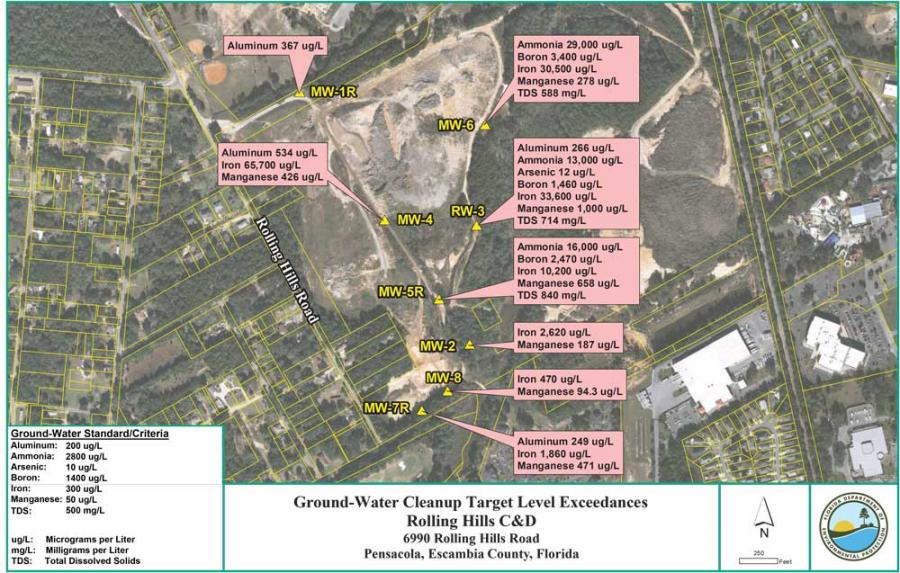 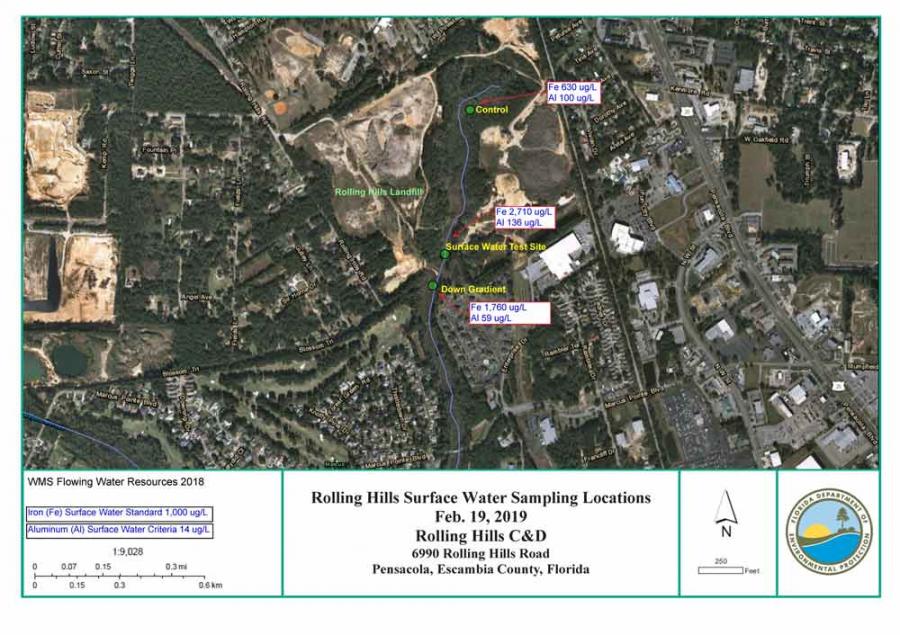 The nearby Wedgewood Community is served by the Emerald Coast Utilities Authority (ECUA) public drinking water system. DEP identified the potable supply well locations closest to the facility, reviewed data and have found no impacts to drinking water from the Rolling Hills facility.

In addition, in response to heightened concerns by the community, DEP conducted independent end-of-tap sampling at the Community Center and nine individual residences within the community. The department analyzed the samples for 25 parameters, including constituents found in the groundwater at the Rolling Hills facility, and found no contaminants to be above the Federal Safe Drinking Water Standards.

On March 22, 2019, DEP filed a Motion for Contempt in Circuit Court against South Palafox Properties, LLC., for failing to comply with the Final Judgment. The Final Judgment required, among other things, that South Palafox continue remediation of the groundwater contamination in accordance with the approved RAP, and remediate all surface water quality exceedances. An Order Granting Motion for Contempt was issued November 25.