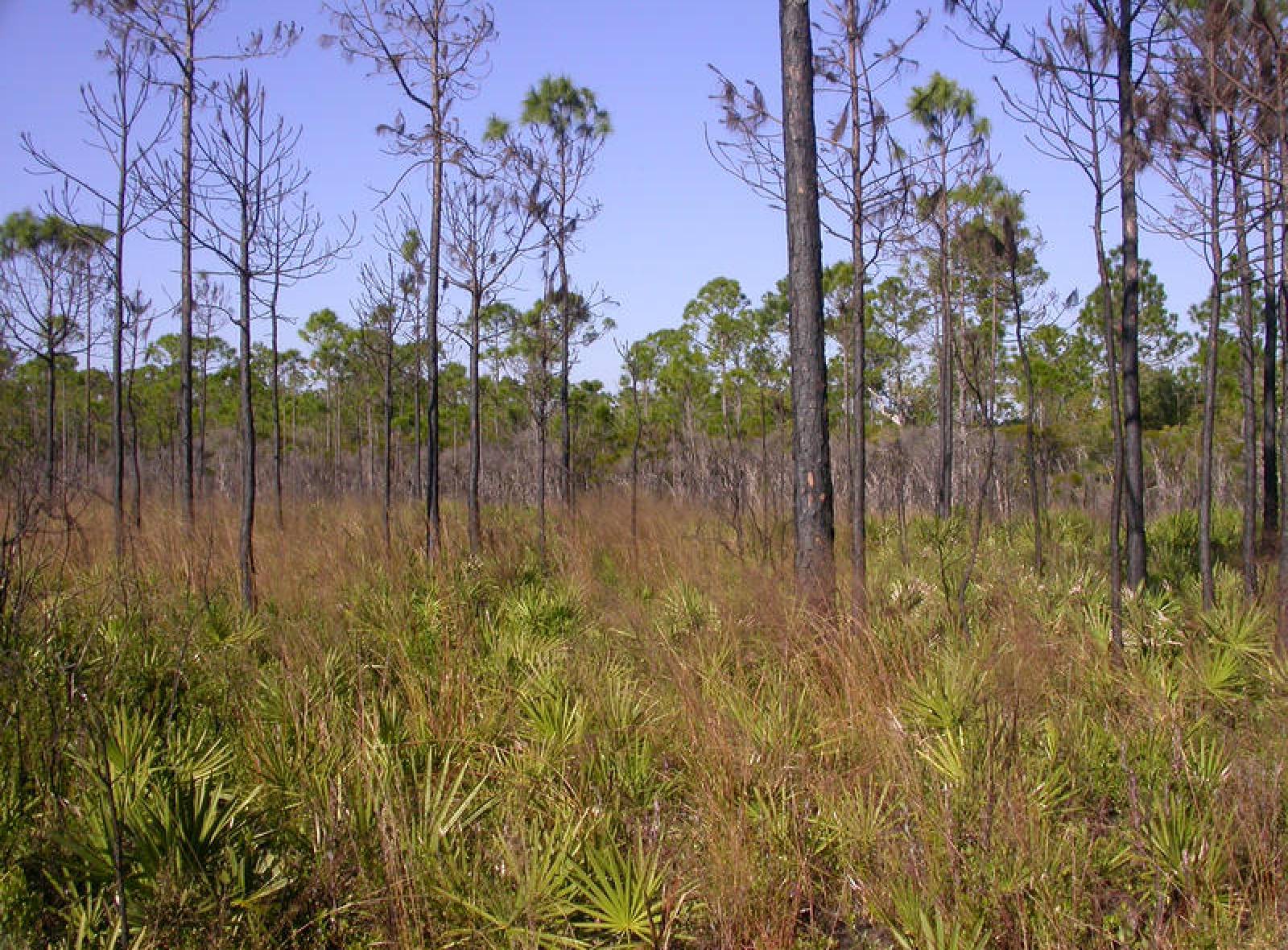 All entities of the St. Joseph Bay State Buffer Preserve are open including the visitor center, trails, and canoe and kayak launch.  Tram tours are operating at a limited capacity. 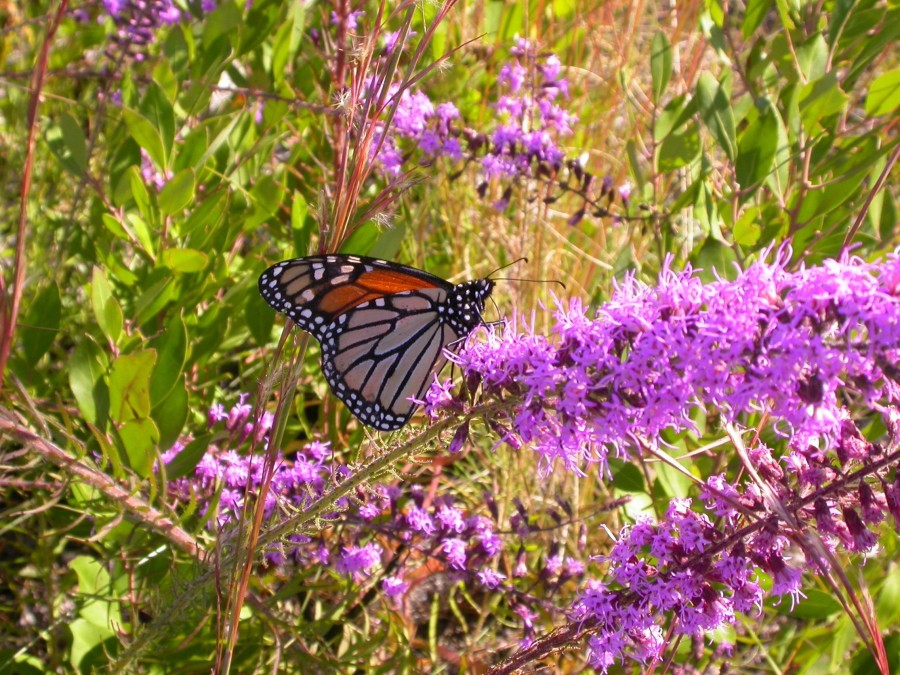 The dune/swale system formed by sand dunes in St. Joseph Bay State Buffer Preserve, created during ancient changes in sea level, is one of the most stable and clearly defined of such topographic features found anywhere. The buffer preserve also includes Money Bayou - an unusual tidal creek that flows directly into the Gulf of Mexico instead of an intervening bay or sound.

A kayak launch may be found on Cape San Blas. Make sure to bring plenty of water, and remember cell phone reception is spotty. Some roads may be seasonally flooded, and biting insects may be numerous in the warmer months.

St. Joseph Bay State Buffer Preserve is a premier example of coastal Florida native landscapes. The relict dune/ridge swale topography provides for a great diversity of natural landscapes and one of the greatest concentrations of rare and endemic species in the southeastern United States.

Intact natural landscapes of relict dune/ridge swales and coastal creeks are rare because of the intensity of development along the coast and the prevalence of planted pines on undeveloped land. The buffer preserve protects a rare example of a coastal landscape including an entire coastal creek - Money Bayou - and its watershed.

General descriptions of these natural communities are available at Florida Natural Areas Inventory through links at the start of each community. The following describes the specific condition of the natural community at the St. Joseph Bay Buffer Preserve.

Basin Marsh - The buffer preserve includes 290 acres of basin marsh, mostly within Depot Creek and the Money Bayou drainage basins, in the heart of the preserve. These areas are continually wet unless there is a very severe drought. The community helps with the freshwater inflow of Money Bayou.

Overall, this community is in good condition and restoration efforts are ongoing to increase the sheet flow and improve the hydrology for this community.

Basin Swamp - The buffer preserve includes 137 acres of basin swamp, much of which borders Depot Creek. The basin swamps are found only within four of the resource management zones. These areas remain wet throughout the year unless there is an extreme drought. The last acute drought allowed access into these wet areas, and a couple of fire lines were installed. These fire lines have become ditches that hold water and are very problematic to the sheet flow movement through this area.

Restoration efforts are on hold within these areas because of the current wet conditions.

Beach Dune - The buffer preserve has 1 acre of beach dune adjacent to the Gulf of Mexico. Most of this dune community is in good condition although this land is starting to see the negative effects of population increase. Trash is starting to wash up on the shoreline and blowing into the dunes, There also are unauthorized public trails.

Management efforts are underway to curb some of the negative effects and help restore this beautiful beach dune community. There have been numerous sightings of a range of wildlife such as bald eagle, an assortment of migratory birds and different land animals all inhabiting this small piece of land.

The freshwater inflow comes from the buffer preserve during normal rain events. This may be augmented by freshwater from Depot Creek during a multi-day heavy rain event, which causes the banks of Depot Creek to overflow and causes large amounts of water to flow into the Money Bayou drainage basin in the form of sheet flow. Money Bayou empties into the Gulf of Mexico and is influenced by tide levels around the mouth of Money Bayou.

When the tide is high, the water upflows into the mouth of Money Bayou, turning the freshwater into brackish water. As a result, public access for canoeing and kayaking up the bayou is dependent on the tide levels.

This community is bordered by the St. Joesph Bay Aquatic Preserve's canoe/kayak launch road to the southeast and is protected by a fence. St. Joseph Bay storm surges do wash over the community during large tropical storms, creating small areas of bare sand, but the coastal grasslands recover quickly.

Coastal Interdunal Swale - The buffer preserve has six acres of coastal interdunal swale at Richardson Hammock and 6 acres on the Lighthouse Bayou. This community has had wildfires in the recent past because of lightning strikes and human causes. Rehabilitation work is underway to restore the fire plow scars that affected a section of this community.

The rest of the community is in good condition.

Most of the community is in good condition and maintenance efforts are underway.

Rare plants found on preserve lands include Elliott's croton and white meadow-beauty, and more may return or be discovered after further restoration and additional surveys.

Dome Swamp - Dome swamps are scattered throughout the buffer preserve. Most of this community is in good condition and has greatly benefited from prescribed fire and the installation of low water crossings that have improved the hydrology immensely. The rest of this community has no fire history, although progress is being made. Non-native invasive species of particular concern include Japanese climbing fern and Chinese tallow.

Maritime Hammock / Shell Mound - The Deal Tract on Cape San Blas contains an isolated pocket of maritime hammock/shell mound, consisting of about 16 acres. This community has been threatened by wildfires in the recent past because of lightning strikes and human causes. It also has suffered disturbance due to illegal digging.

Rehabilitation is underway to restore the fire plow scars from wildfire suppression efforts, and monitoring for illegal digging is ongoing. Illegal digging can result in loss of historical resources and allow non-native species to invade.

The rest of the community is in good condition.

This community on the Deal Tract occurs on moderately alkaline quartz sands mixed with shell fragments. This community serves as a crucial resting and foraging area for songbirds during their fall and spring migrations to and from the tropics. Due to the coastal location, fires are naturally rare in this community. Fires may weaken the canopy trees making them more susceptible to damage by other coastal stresses, such as salt spray and storm winds.

Mesic Flatwoods - The buffer preserve consists of 1,464 acres of mesic flatwoods that need to be burned frequently to:

Nearly all flora and fauna in this habitat depend on fire, at least during some portion of their life cycle. Without fire, mesic flatwoods will become hardwood-dominated and lead to heavy buildup of pine litter. This dense litter may slow pine production encouraging succession to hardwoods.

If fire is too frequent or too hot, it may eliminate pine recruitment leading to succession to dry prairie. This community type still needs habitat improvement by the introduction of fire. There are resource management zones that have no fire history in them, although progress is being made.

These communities have been subject to lightning fires in the past that required large equipment to contain. This introduction of large equipment caused plow scars across the landscape that are currently healing themselves, although it will take many years. Any new plow scars are being immediately rehabilitated by the buffer preserve staff as they happen.

This community has seen little to no burn history and can sometimes be used as a natural fire break during prescribed burns. Visitors can see an array of different bird species that thrive in this community type and they can be easily viewed from the Money Bayou bridge on County Road 30A.

Sandhill - The buffer preserve contains 92 acres of sandhill. The community is in good condition and subject to prescribed fire within the natural fire frequency.

An additional 76 acres that were converted to pine plantation prior to acquisition are being restored to sandhill, mesic flatwoods or scrubby flatwoods through the careful reintroduction of fire.

Scrub - The Deal Tract includes 76 acres of scrub habitat, most of which is in excellent condition. The scrub grades into mesic flatwoods and maritime hammock.

The Deal Tract provides very rich migratory bird habitat and is a part of the Great Florida Birding Trail.

Scrubby Flatwoods - At the buffer preserve the highest, most xeric sites (after scrub) are called scrubby flatwoods, and this natural community grades down into mesic and wet flatwoods. The flatwoods are maintained ecologically by fire and are dominated by longleaf pine, oaks, saw palmetto, wax myrtle, blueberries and gallberry in the shrub layer.

A very species-diverse shrub and herbaceous layer occurs in both the flatwoods and the wet prairies in the landscape and around wetlands. Here, scrubby and mesic flatwoods provide habitat for Telephus spurge, with Chapman's rhododendron (Rhododendron chapmanii) occupying ecotones between the scrubby flatwoods and lower, wetter habitats. This community type still needs habitat improvement by the reintroduction of fire.

Most of the community is in good condition, and restoration efforts are under way. These restoration efforts will improve old fire plow scars and rehabilitated fire containment lines that are no longer needed because of the management zones being in good fire maintenance condition.

Wet Flatwoods - The buffer preserve contains 410 acres of wet flatwoods. This community type still needs habitat improvement by the reintroduction of fire. There are portions of the buffer preserve that have no fire history, but progress has been made.

Most of the community is in good condition, and old fire plow scars and fire containment lines that are no longer needed are being restored.

Wet Prairie - Wet prairies in northern Florida are some of the most diverse communities in the United States, with an average of more than 20 species per square meter in some places and more than 100 total species in any given stand. There are 809 acres of wet prairie scattered throughout the buffer preserve, which are the swales of old relic dunes.

At the buffer preserve, the wet prairies provide habitat for Godfrey's butterwort (Pinguicula ionantha), especially in the wettest portions of the wet prairie, and in the ecotone around creeks. This community type still needs habitat improvement by the reintroduction of fire.

Most of the community is in good condition, and maintenance efforts are underway. These efforts will improve old fire plow scars and rehabilitated fire containment lines that are no longer needed because of the good fire maintenance condition. The Panhandle is a hotspot for rare plants of the wet prairie community with 25 out of the 30 rare species found in this type of community; 12 of these are endemic to the Panhandle and 10 can be found within the buffer preserve.

Xeric Hammock - The buffer preserve has four acres of xeric hammock on the Deal Tract. This rare community has been able to reach its climax condition due to the lack of fire within this part of the Deal Tract.

The Deal Tract has been threatened by wildfires, but due to its location, this community is more protected.