Salt marshes are coastal wetlands rich in marine life. They are sometimes called tidal marshes, because they occur in the zone between low and high tides. Tidal marshes are floral based natural communities generally characterized as expanses of grasses, rushes and sedges along coastlines of low wave energy and river mouths.

Salt marsh plants cannot grow where waves are strong, but they thrive along low-energy coasts. They also occur in areas called estuaries, where freshwater from the land mixes with sea water. A distinctive feature of salt marshes is the color - the plants are various shades of gray, brown and green.

What are Salt Marshes? 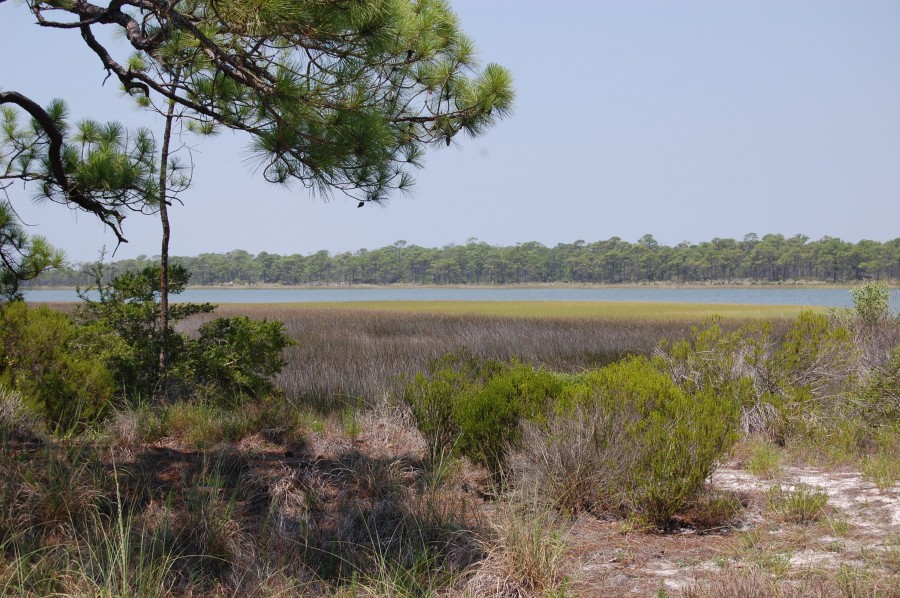 Salt marshes are composed of a variety of plants: rushes, sedges and grasses. Florida's dominant salt marsh species include: black needle rush (Juncus roemerianus), the grayish rush occurring along higher marsh areas; saltmeadow cord grass (Spartina patens), growing in areas that are periodically inundated; smooth cord grass (Sporobolus alterniflorus), found in the lowest areas that are most frequently inundated and sawgrass (Cladium jamaicense), which is actually a freshwater plant that sometimes grows along the upper edges of salt marshes. All are tolerant of the salt in sea spray.

Salt marshes are important for many reasons. Hidden within the tangle of salt marsh plants are animals in various stages of life. Animals can hide from predators in marsh vegetation, because the shallow brackish area physically excludes larger fish. Tidal marshes are also extremely important because of their storm buffering capacity and their pollutant filtering actions.

The dense roots and stems hold the unstabilized soils together, reducing the impacts of storm surge. The plants, animals and soils filter, absorb, and neutralize many pollutants before they can reach adjacent marine and estuarine communities.

South of Cedar Key salt marshes begin to be replaced by mangroves as the predominant intertidal plants. On the Atlantic Coast, salt marshes occur from Daytona Beach northward.

Salt marsh systems are naturally dynamic and constantly changing; however, upland and coastal development greatly impact Florida’s salt marshes. Adverse impacts of urban development of tidal marshes include degradation of water quality, filling of marshes, increased erosion, and other alterations such as bulkheading and beach nourishment. The most attractive coastal areas for development activities frequently are the most ecologically fragile and are extremely vulnerable to development of any kind.

The elimination and alteration of Florida salt marshes have a negative effect on fishery resources. Estuaries provide nursery areas for at least 70% of Florida's important recreational and commercial fishes, shellfish and crustaceans. Many of Florida's marine fisheries will decline and may disappear without coastal wetlands.