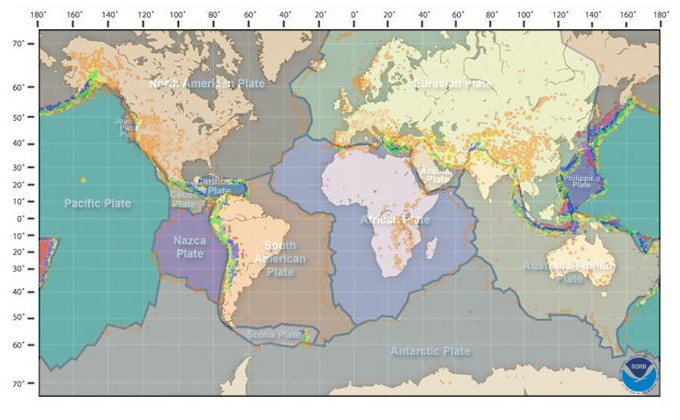 The earth is more than 4.5 billion years old! During this unimaginable expanse of time, our planet has undergone drastic changes. For the earliest part of earth’s history, the planet was a molten inferno. As the planet slowly cooled, rocks and minerals began to form and continents and ocean basins took shape. Earth’s continents today look nothing like they did hundreds of millions of years ago. In fact, the continents move around through a process called plate tectonics.

The Theory of Plate Tectonics is relatively modern and is very different from historic thought, which included ideas ranging from shrinking earth to continents moving across the ocean floor. Fossil evidence paired with lithographic correlation helped solidify the concept of plate tectonics to the theory we know today.

Continental crust (the thin outer skin of our planet) sits on top of hot rock material, called the mantle, which behaves like cold syrup. The earth consists of dozens of major and minor plates that move under, over and alongside each other at areas known as plate boundaries. There are three different types of plate boundaries:

At these plate boundaries, plates react with one another differently based on their composition. The denser oceanic plates tend to sink, while the less dense continental plates do not.

As the plates shift they can collide, causing mountain ranges and deep ocean trenches, and they can slide past one another along long faults, like the San Andreas fault, and they can spread apart as seen along mid-ocean ridges. Plate tectonics describes the processes involved in plate motions and allows geologists to understand how earth’s plates, of which Florida is a part, came to be. Modern research has taught us that earth is a truly dynamic planet.

To learn more about how tectonics has shaped Florida, see Florida's Geologic History