Floods most often occur during major storm events that produce large amounts of rain over short periods of time. There are three potential scenarios:

While hurricanes are Florida’s most obvious flood producers, it is important to understand that heavy rainfall can cause flooding any time of the year and anywhere in Florida. Flooding may result in the loss of human life and property. Episodes of flooding may be accompanied by contamination of aquifers and water wells in some areas. Floridians should be aware of boil-water warnings posted in their local news media. It is vitally important that everyone living in Florida be aware of the potential for flooding and the resources available to assist Floridians in dealing with it.

Coastal flooding can occur related to storms and hurricanes as in scenario three mentioned above. However; some flooding in coastal regions is not related to storm events, but to sea-level rise. As an area is impacted by rising sea-level, land subsidence and increase in ocean elevation can cause flooding in areas not previously threatened by high tides. Flooding can occur during exceptionally high tides within annual fluctuations or when strong prevailing winds pile water against the shoreline. The National Oceanographic and Atmospheric Association (NOAA) reports that non-storm related nuisance flooding has increased three-fold in the southeastern United States in the past 20 years. This type of flooding can impact homes and businesses, but also infrastructure such as roadways and water and sewer delivery and treatment facilities. 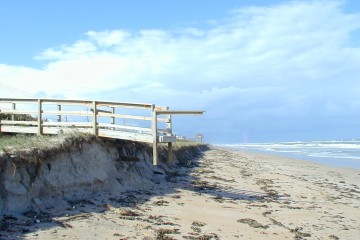 Structures such as piers, sea walls, jetties, and navigational inlets may interrupt the movement of sand and it can become trapped in one place by these types of structures. The longshore currents will continue to flow even though there is sand trapped elsewhere. With significant amounts of sand trapped in the system, the continuing motion of currents results in erosion. Human development and construction activities resulting in the unnatural trapping of sand have the potential to result in significant coastal erosion over time.

The most severe coastal erosion can occur over a very short period of time when the state is impacted by storms or tropical systems. Sea-level rise can also have longer term impacts to coastal flooding and erosion and highlight the need for coastal zone communities to make resiliency plans for mitigating the impacts of sea-level rise.