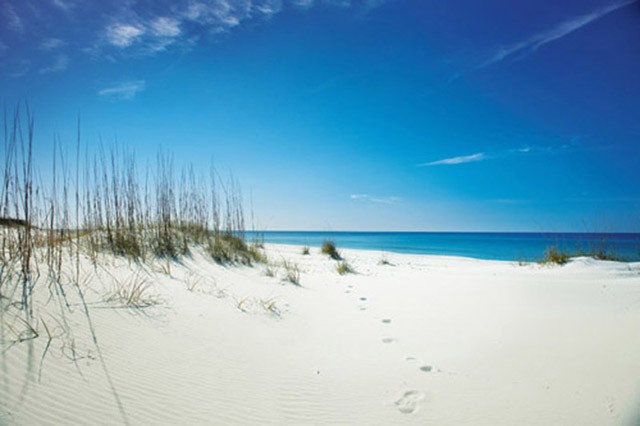 Florida has 823 miles of sandy coastline, and dunes play an integral part in the sandy shoreline ecosystem of dune, beach and nearshore waters. Many migratory and resident shorebirds use the beach and dunes for nesting, resting and foraging. Sea turtles nest at the base of the dunes, and several species of endangered mice live among the vegetation.

It is important to access the beach using the existing boardwalks and trails to protect the dune structure and vegetation from erosion.

Coastal dune lakes are found in the United States only in Oregon and in Walton County, Florida. These lakes are fed by groundwater seepage, streams, rainfall and storm surge. The lakes in Florida have an intermittent connection with the Gulf of Mexico.

Each lake has unique water chemistry; some of the lakes are freshwater while others are mainly saline. There are several public access points from which to enjoy these exceptional resources. 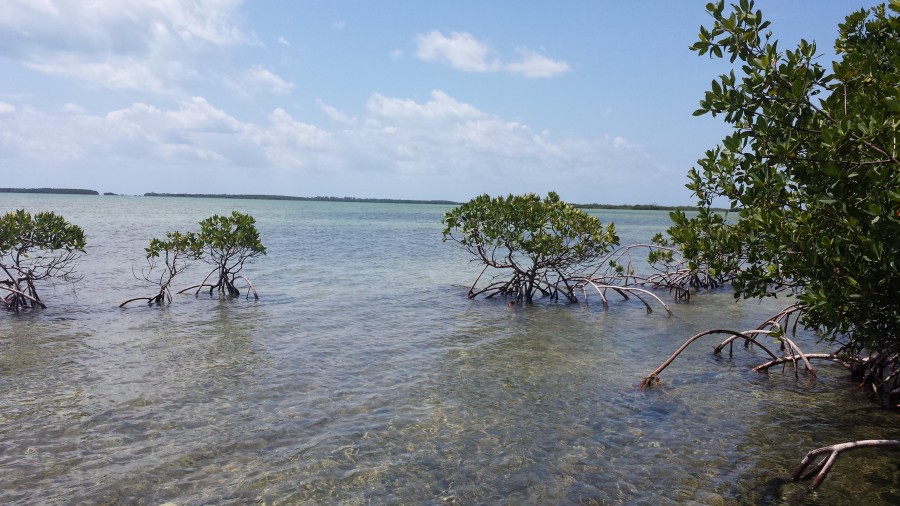 Mangrove forests are present along Florida’s estuarine shores from Ponce de Leon inlet on the Atlantic Coast to Cedar Key on the Gulf Coast. There are also pockets of mangroves expanding north as our weather warms. Mangroves provide habitat in their tree limbs to nesting shorebirds and in their root system to marine fish and crabs. Mangroves’ greatest contribution to estuary health is through decomposition of their leaves in the water. The breakdown of mangrove leaves is a primary source of food for the estuarine food chain that is essential to recreational and commercial fisheries. 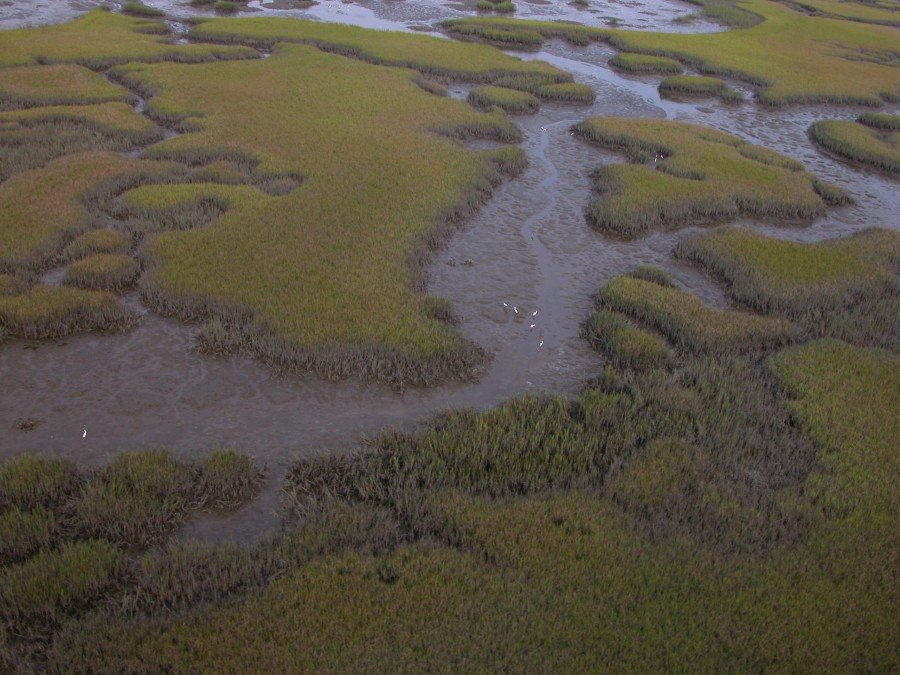 Salt marshes act as an important nursery area to small fish and invertebrates where they feed and hide from predators. The salt marsh also helps stabilize the shoreline during high tides and tropical storms. Salt marshes develop where the wave energy is low and mangroves are not present in the intertidal zone. Although salt marshes are present throughout the state, the most extensive expanse of salt marsh shoreline is present in the Big Bend area of Florida. 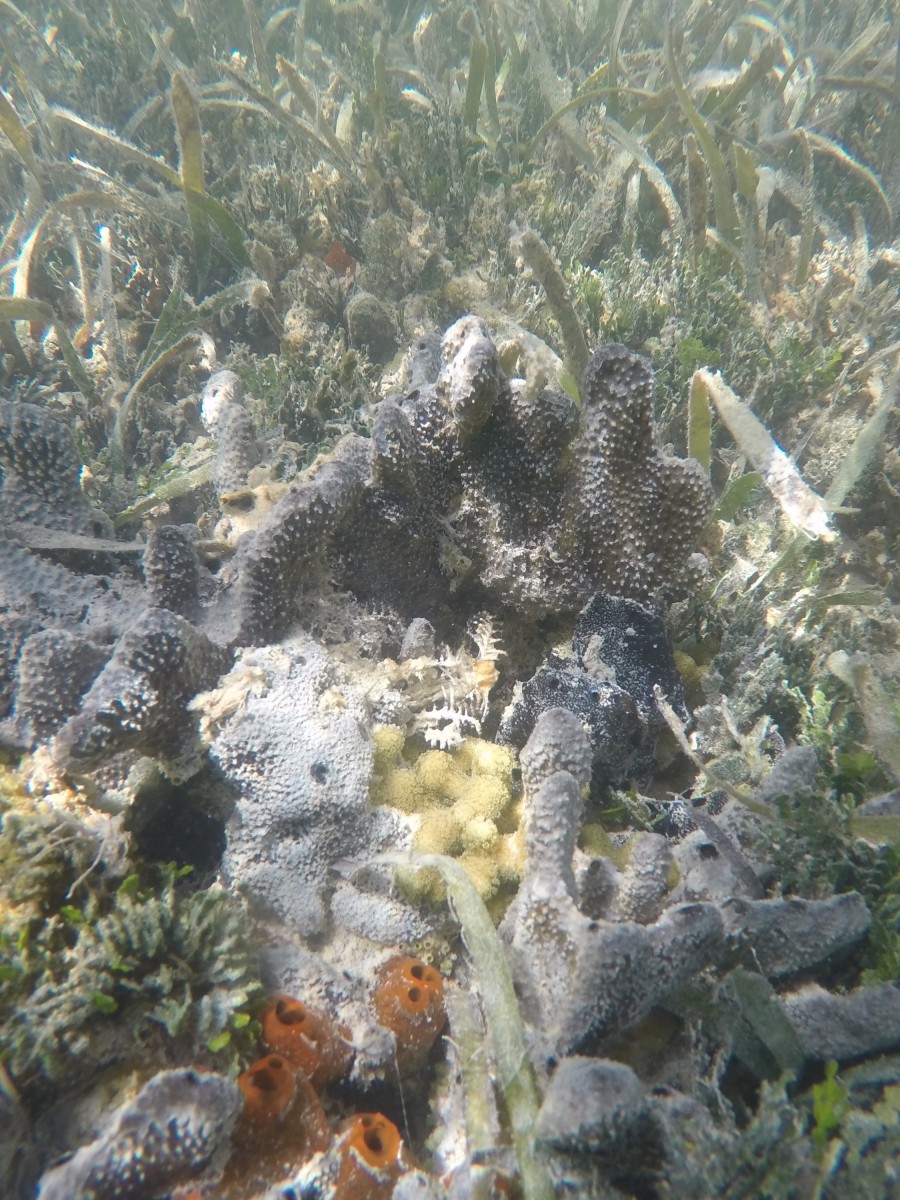 Seagrass beds provide shelter and food for many marine animals, acting as a nursery in the shallow waters around the state. Seagrass beds also stabilize the bottom with their roots and rhizomes and help maintain water clarity by trapping fine sediments and particles with their leaves.

There are seven different species of this flowering plant and an estimated 2.2 million acres of seagrass beds in the waters of Florida. The largest extent of seagrass meadows can be found in the Keys and the Big Bend area.

To protect seagrass, stay alert and aware while boating to avoid damaging the meadows with prop scars and boat groundings. 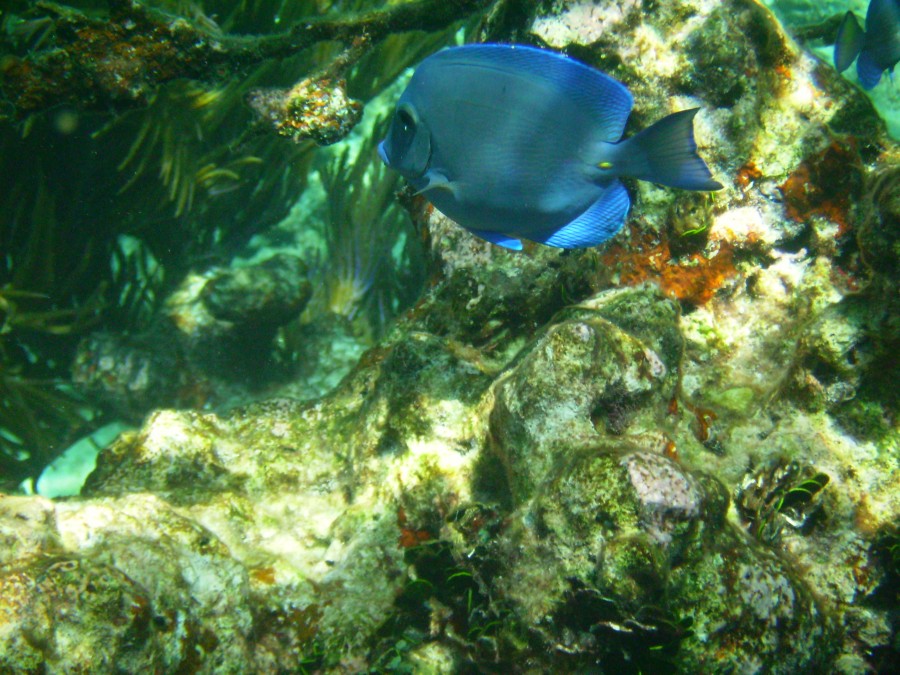 Florida is the only state in the continental United States to have extensive shallow coral reef formations near its coasts. Coral reefs are present along the east coast of south Florida, stretching 358 miles from Stuart south to Key West and the Dry Tortugas. Roughly two-thirds of the Florida Reef Tract lies within the Florida Keys National Marine Sanctuary, a marine protected area that surrounds the Florida Keys island chain.

Corals are classified as animals, yet microscopic plants live within the animal tissues in a symbiotic (cooperative) relationship. The coral animals benefit from the sugars and oxygen that the plants provide through photosynthesis, and the plants gain nutrients from animal waste and are protected within the coral tissues. These tiny plants give the coral much of its color.

To help protect the coral reef, always tie up to mooring buoys where available. If you must anchor near the coral reef, make sure it is in the sand and the anchor line is clear of all coral formations. You can also help by removing any marine debris that you see in the area. 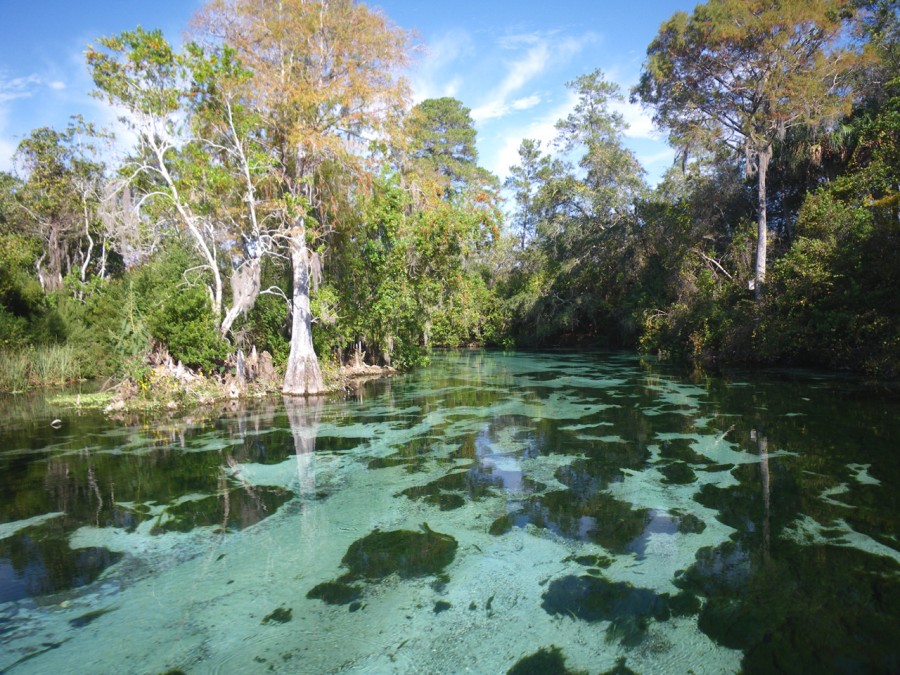 The rivers of Florida are as varied as the lands through which they flow. There are approximately 50,000 miles of rivers and streams in Florida which fall into three types: blackwater, alluvial and spring-fed. Each river provides unique habitat along its banks and in its stream beds. The St. Johns River, which is also the longest river, is the only river in Florida to flow north rather than south.

There are many opportunities throughout Florida to enjoy canoeing, kayaking or tubing on these scenic rivers. 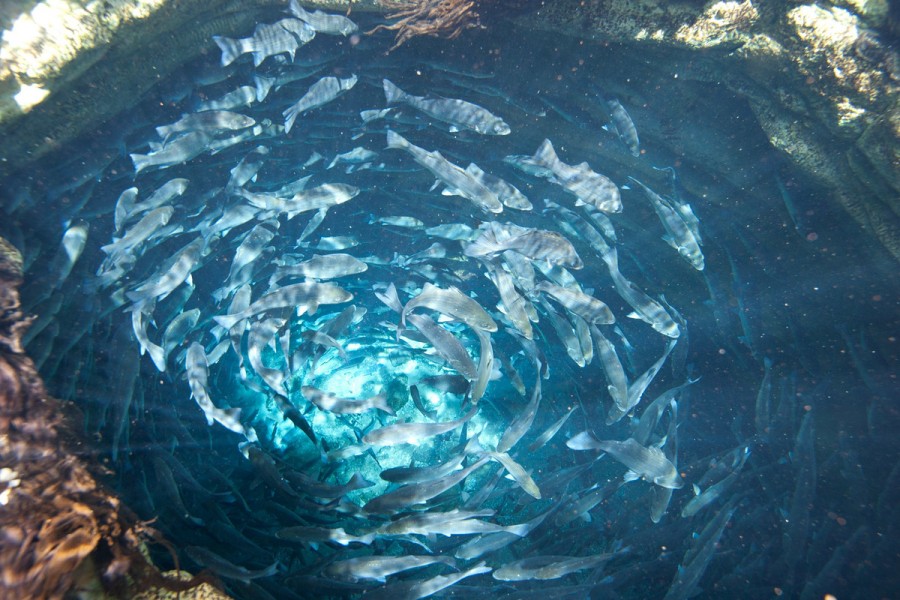 There are 700 identified freshwater springs in Florida. The clear, cool water flowing out of the springs comes from Florida’s underground aquifer. The waters at the springs are a constant temperature, remaining at a cool 68 to 73 degrees throughout the year. In the winter, these warmer waters attract endangered manatees to many of the spring runs.

Florida’s springs have attracted people since prehistoric times. The springs made the perfect home for native Floridians who used them as a source of water and food. Early explorers, such as Ponce de Leon searching for the “Fountain of Youth,” were also drawn to these locations. Today, Florida’s springs continue to attract people with their unique beauty as they provide immeasurable natural, recreational and economic benefits for our residents and visitors. Springs are mainly found in central and north Florida, and many major Florida springs have public access available.

The piping plover is a small (7 inches), stocky, sandy colored bird that can be found along Florida’s beaches between September and April. These endangered birds nest in the Great Plains, Great Lakes or North Atlantic Coasts but winter along the Gulf and South Atlantic shorelines.

The piping plover prefers sandy beaches and tidal mudflats to feed on a variety of insects and invertebrates. The birds are particularly sensitive to disturbance from people, dogs or vehicles on the beach.

In Florida, Honeymoon Island State Park is home to one of the largest wintering flocks.

Northern right whales migrate down from the New England area to northeast Florida each year. The whales come down to give birth in waters from Jacksonville to Cape Canaveral from December through March. These highly endangered whales weigh up to 70 tons and reach 60 feet and can be sighted from the beach. The whales were named right whales, originally, because they were “the right whale” to hunt due to the whales’ slow speed and tendency to float when killed. Right whales are a type of baleen whale, meaning they do not have teeth and filter zooplankton from the ocean for food. 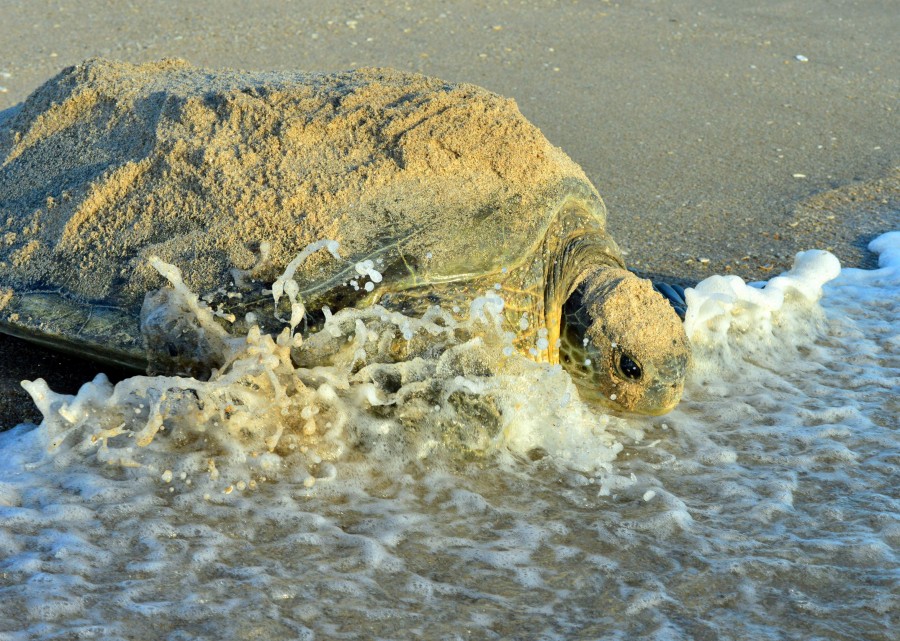 Five different species of sea turtles come ashore to nest on the beaches of Florida from May 1 to October 31. All of these turtles are endangered or threatened with extinction. You can help protect these sea turtles by keeping the beaches clear. Always fill in holes and flatten sand castles at the end of the day; remove beach chairs, toys and umbrellas each day; pick up any litter and dispose of it properly; and don’t use flashlights, build bonfires or display fireworks during nesting season. If you are lucky enough to observe sea turtles on the beach, be sure to give them plenty of space. Any disturbance can upset the nesting process.