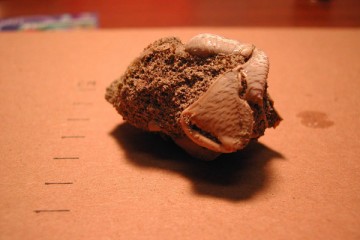 What is a Fossil?

A fossil is any trace of past life that lived prior to historic times. A scientist who studies fossils is called a paleontologist. Fossils come in many forms - seashells, animal bones, leaf impressions, wood, even animal burrows or footprints preserved in rock. They also come in many sizes, ranging from less than 1/100th of a millimeter to greater than tens of meters. Because soft flesh does not preserve well, many fossils represent only the hard parts of the original animal, such as the shells of molluscs or the bones of land animals like the mastodon.

Some fossils, such as wood, bones, and teeth, are petrified, or turned to stone. Petrification occurs when minerals replace the organic material that originally comprised the organism. Other fossils such as seashells are preserved with little change. Fossils provide important information about the past life on earth. Based on the types of plants and animals present in a rock unit, scientists can often determine what ancient climates were like as well. Fossils are also useful in correlating and determining the age of rock units. 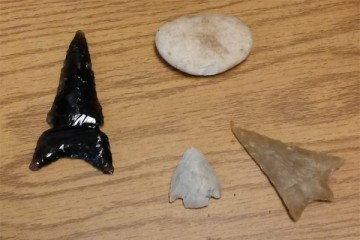 What is an Artifact?

Fossils and artifacts are often confused. Artifacts are objects that are made or used by humans. The term is generally applied to items that are very old (hundreds to thousands of years). Florida has a wealth of historic and prehistoric archeological sites which are defined by the artifacts that are present. Some commonly encountered artifacts in Florida include spear points, arrowheads, pottery sherds and iron tools that were brought to Florida by Europeans.

Some uncommon artifacts include bone tools, wood and fabric. Florida’s semi-tropical climate and plentiful rainfall are not conducive to preserving artifacts that are made from these materials. As a result, it is much more common to find stone and metal tools which can withstand Florida’s harsh climate.

It is currently illegal to remove artifacts from state land. It is best to leave artifacts where they are discovered and to report the find to the Florida Department of State, Division of Historical Resources or a professional archeologist.