An early warning network for coral bleaching in southeast Florida

Are you interested in taking a BleachWatch Training? Sign up here to provide your contact information and a coordinator will reach out one when is scheduled!

View the most recent current conditions report to find out where corals are at the greatest risk of bleaching and disease. 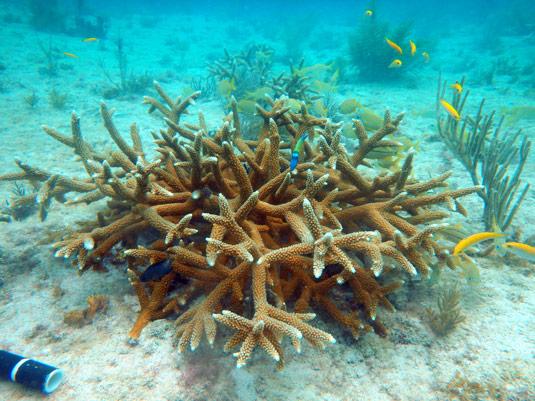 Recreational, commercial and scientific divers are encouraged to become part of the BleachWatch Observer Network by participating in a training session. These two-hour classes include a short lesson on coral biology, an overview of coral bleaching and disease, a description of the BleachWatch Early Warning Program, and how to properly assess coral condition, record observations and submit reports.

There are many questions about coral bleaching that must be answered to fully assess the environmental impact of bleaching events. Where and when is bleaching taking place? What species are more vulnerable? What is the duration and severity of the bleaching event? And finally, what is the recovery and resilience potential of the southeast Florida coral reef ecosystem? The SEAFAN BleachWatch program was designed to help answer some of these questions by providing valuable information about the condition of southeast Florida's coral reefs.

The BleachWatch Program combines climate and sea surface temperature data with field observations on the condition of coral reefs from a trained observer network to detect the potential onset of mass bleaching events. The environmental monitoring data will be combined with observer network reports to produce a comprehensive overview of current conditions in the region. 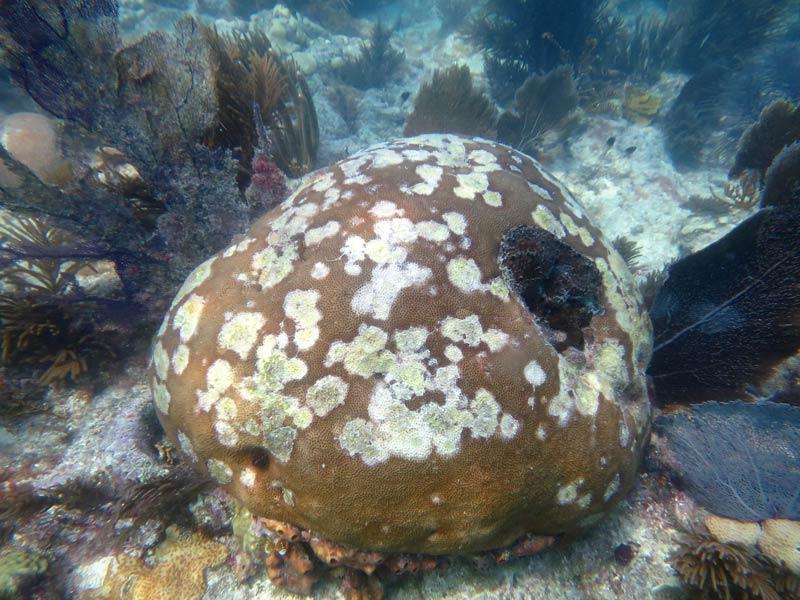 While localized, colony-specific bleaching has been recorded for more than 100 years, there is an indication that coral bleaching has increased in frequency and severity along the Florida's Coral Reef since the 1980s. Increasing public, media and scientific concern for the reef highlighted the need for a program to monitor bleaching before, during and after each incident to help improve scientific understanding.

In 2005, modeled after the Great Barrier Reef's BleachWatch Program, the Florida Keys National Marine Sanctuary and Mote Marine Laboratory created the Florida Keys BleachWatch Program to act as an early warning network for coral bleaching. In 2013, the Florida Department of Environmental Protection created SEAFAN BleachWatch, an extension of this early warning network along the northern portion of the Florida's Coral Reef, located off of mainland southeast Florida from the northern border of Biscayne National Park in Miami-Dade County to the St. Lucie Inlet in Martin County.

Stony coral tissue loss disease was first observed in Miami-Dade County in 2014, and now has spread throughout the entire Coral ECA. In 2016, SEAFAN responded to the outbreak by expanding the BleachWatch program to include observations of coral disease. The BleachWatch Observer training now includes a history of the disease outbreak, and observers are trained in differentiating disease lesions from bleaching. Community observations of the disease have been paramount in helping understand the spatial extent of the outbreak, as well as which corals are affected. These reports have also helped to coordinate intervention and treatment of corals with disease. Read the blog Coral Strike Team Responds to SEAFAN Report. 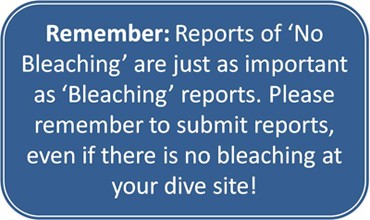 The onset and severity of mass coral bleaching can vary by species, geographic location and type of reef zone, which makes it very difficult to predict where or when it will occur. Like the Florida Keys BleachWatch Program, SEAFAN BleachWatch relies on an observer network of trained recreational, commercial and scientific divers to help identify when and where bleaching is taking place by monitoring and reporting on the condition of the reefs in southeast Florida.

Divers are alerted when conditions favorable for bleaching are present, so that field data can be gathered before, during and after a bleaching event. After each visit to the reef, divers complete a data sheet, either printed or online, and send it to the BleachWatch coordinator.

Divers are asked to report whether they see bleaching or disease and are encouraged to send pictures of their observations. Reports of no bleaching or no disease at any time of year is are equally important to help establish baseline non-bleaching conditions.

To help ensure consistency in reported data, divers attend a formal training session and are provided with bleaching and coral ID keys to use as reference below and above the water. While most involvement in the program will occur during the summer months when the risk of bleaching is greatest, reports occasionally may be solicited at other times of the year, such as during unusually low temperatures.

Weather conditions such as calm winds and clear sunny days can lead to an increase in sea temperatures and are generally associated with mass bleaching events. Seasonal climate predictions and local weather forecasts are monitored for periods of light winds and decreased cloud cover, which may intensify coral stress during summer months when sea surface temperature is elevated.

Sea surface temperature is monitored by NOAA's Coral Reef Watch program, which provides a variety of internet-based satellite imagery products that summarize temperature data and can be used to predict if conditions are conducive to coral bleaching. Small increases in sea temperatures over several weeks or large increases over a few days stress coral and, if these conditions persist, could lead to mass bleaching. The Coral Reef Watch products are used to assess thermal stress and determine if there is a significant risk of coral bleaching in southeast Florida. If available data indicates the presence of environmental conditions favorable for bleaching, an alert will be sent out to the BleachWatch Observer Network to submit field observations on the condition of coral reefs throughout the region.

Current Conditions Reports are generated throughout the summer months to provide a summary of all available data being collected, including relevant weather information and NOAA Coral Reef Watch analysis, as well as BleachWatch Observer Network reports.

These reports provide an overview of conditions throughout southeast Florida. They are available below and produced monthly, weekly or biweekly, depending on the severity of the environmental conditions and extent of coral bleaching observations.

What is Coral Bleaching?

Corals are composed of animals called coral polyps that secrete hard, limestone skeletons. A single coral colony is made up of numerous individual coral polyps. These polyps receive up to 90 % of their energy requirements from unicellular algae known as zooxanthellae that live within their tissues and provide them with carbohydrates and oxygen through photosynthesis. The zooxanthellae are usually golden brown in color and are found at various densities in individual species of corals. Zooxanthellae, along with the additional pigments that some corals have in their tissues, provide the normal "healthy" coloration of coral.

Stressed corals may lose or expel zooxanthellae, which leaves behind the transparent tissue and reveals the underlying white skeleton, giving the coral a bleached white appearance. This process is called coral bleaching.

Bleaching is a stress response that results when the coral-algae relationship breaks down. Coral bleaching can be caused by a range of environmental stressors such as pollution, oil spills, increased sedimentation, extremes in sea temperatures and salinity, low oxygen, disease and predation. Bleached corals are still living, and if the environmental conditions return to normal soon enough, the corals can regain or regrow their zooxanthellae and survive the bleaching event.

If the stressors are severe or prolonged, however, bleaching can lead to the death of corals. Bleached corals are more susceptible to disease, predation and death because they are without their primary energy source.

Not all corals are affected by bleaching in the same way. Different species and growth forms of corals have different susceptibilities to bleaching. Since all reef communities are composed of a different mix of corals, often some reefs are more badly affected than others. Also, levels of climate and environmental stress can vary among reefs, leading to differences in the amount of bleaching seen at different locations. This leads to many unanswered questions about mass bleaching and resilience of different reef communities. 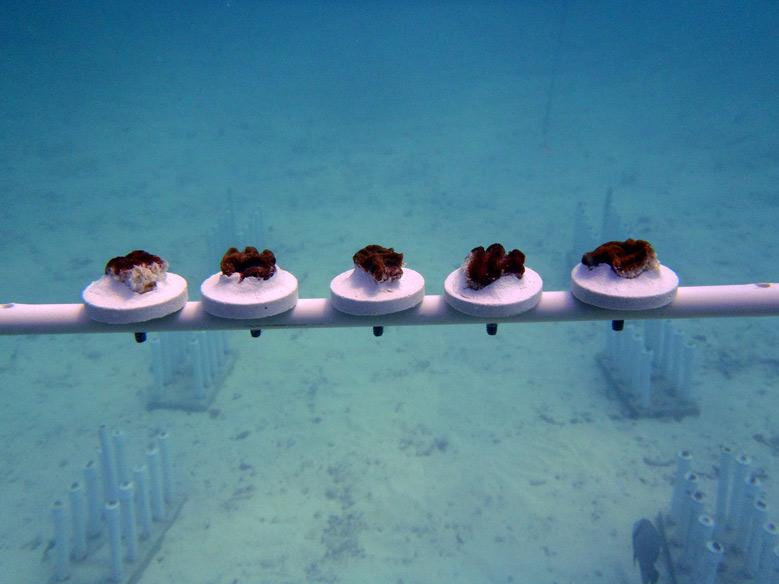 Localized or colony-specific bleaching has been recorded for more than 100 years but only in the last 20 years have we seen mass bleaching events in which a range of coral species bleach over a large area of reef. While the influence of local stressors can explain small-scale bleaching events, widespread, mass bleaching is most commonly attributed to elevated sea temperatures, in conjunction with increased ultraviolet radiation due to calm weather and clear skies. Because most corals live close to their maximum thermal limits, a temperature increase of only 1-2 degrees Celsius above the long-term average can trigger mass bleaching, particularly when prolonged.

In 1997-1998, a worldwide mass bleaching event caused severe damage to an estimated 16% of the world's reefs. Additional bleaching events have occurred in some regions since, including the Caribbean and Great Barrier Reef, and it is likely that both the severity and frequency of such events will increase in the future.

In situations where bleaching causes extensive coral death, recovery is dependent on new coral recruits settling and growing on the reef. This is a time-consuming process, even on relatively healthy reefs. Regrowth of reefs that have been severely damaged by bleaching may take decades, and the new reef may be significantly different from that which existed before bleaching. If a recovering reef is affected by another bleaching event or stress before it has fully recovered, then it may persist in a degraded state for much longer. In locations suffering from pollution or other chronic pressures, recovery can be particularly slow or inhibited altogether.