St. Andrews Bay Aquatic Preserve is bordered by the maritime communities in Bay County. These areas provide access to the water at municipal boat and kayak ramps, as well as public beaches.

Visitors to the aquatic preserve enjoy snorkeling, fishing and boating in the bay. Primitive campgrounds are available on the island.

The Florida Department of State's Division of Historical Resources has identified nine archaeological sites in the immediate coastal areas of St. Andrews Aquatic Preserve. They include three shell middens (FMSF numbers BY00086, BY00087, BY00170) dating back to the middle to late Woodland Period (300-1000 A.D.) and one shell midden (BY00171) of unknown date that has been destroyed by wave action. Due to the moderate wave energy of the coastline, many relict Native American sites were probably either buried by sand or destroyed by wave action.

Notable among the historical sites are Spanish Shanty Cove (BY00086), which is an unnamed village site and shell midden affiliated with the Weeden Island culture, circa 700-1000 A.D. The site has been considered as having potential for nomination to the National Register of Historic Places. The Spanish Ante Point site (BY00087) was recorded as a village site with midden, some of whose area was occupied by tabby floor of a historic house site. BY00170, which is unnamed, and BY00171 had a Fort Walton affiliation.

A second site combining pre-contact and recent historical remains is BY00798, a mostly oyster shell midden which also contained bone and pot shards. It appears affiliated with late Weeden Island culture (prior to about A.D. 1000).

Another interesting resource is the site of two World War II era gun placements (BY01341 and BY01342) in St. Andrews State Park. The remains of one serve as the foundation for a pavilion in the Jetty Use Area. Another placement is periodically exposed on the beach shoreline from erosion.

Two picnic shelters in the park (BY01655 and BY01656) were built in 1956 as part of a designated segregated use area for African Americans. St. Andrews State Park was one of only a few state parks that allowed entry to African Americans in the 1950s.

A ninth site, the park’s Pier Store (BY01654), has been removed and was replaced by a new facility that was relocated to a more inland location in order to reduce encroachment from nearby dunes.

There are currently several species of coral and related species on the rocks and the surrounding sand of the jetties in St. Andrews Aquatic Preserve. The appearance of these corals was first noted in 2010 by Panama City Marine Institute and has continued to spread.

The largest concentration is on the pass side of the western jetty wall at a depth of 10 to 25 feet. There are also growing colonies of the Gulf side as well. Each area has at least two distinct species, one being the tube coral (Cladocora arbuscula ) and the diffuse ivory bush coral (Oculina diffusa). There are also reports of robust ivory tree coral (Oculina robusta) in the area, but identification has not yet been verified. The concentration of corals can be dense in some spots, specifically on the pass side where there is a greater flow of water. Further information about the distribution, abundance and condition of coral reef in St. Andrews Aquatic Preserve is still needed.

The distribution, abundance and condition of octocoral beds in St. Andrews Aquatic Preserve is unknown at this time. Management considerations should include locating all true octocoral beds and providing protection for them from external degradation. Primary threats to octocoral beds include siltation from beach renourishment or beach restoration projects; anchor damage by nautical craft; trawling by commercial anglers; collection for tourist-oriented trade; and water pollution, particularly oil spills. 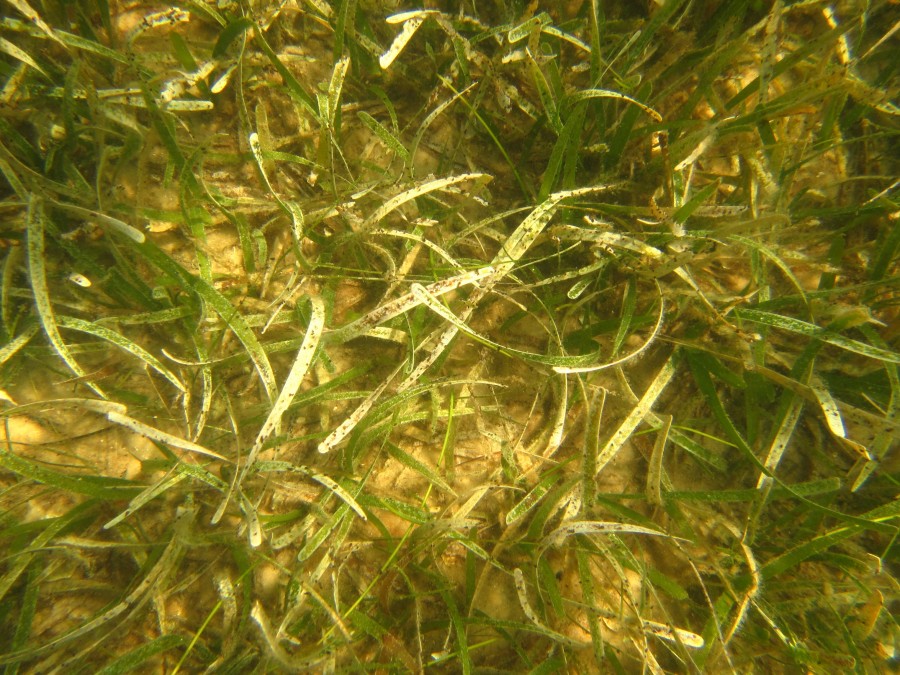 This community occurs in subtidal (rarely intertidal) zones, in clear, coastal waters where wave energy is moderate. Seagrasses are not true grasses but are more closely related to terrestrial lilies and gingers than grasses. The three most common species of seagrasses in Florida are turtle grass (Thalassia testudinum), manatee grass (Syringodium filiforme) and shoal grass (Halodule wrightii), which are all found in St. Andrews Aquatic Preserve. Nearly pure stands of any one of these species can occur, but mixed stands are also common.

Species of Halophila may be intermingled with the other seagrasses, but species of this genus are considerably less common than turtle grass, manatee grass and shoal grass. Widgeon grass (Ruppia maritima) also can be found occurring with the previously listed seagrasses although they occur primarily under high salinities while widgeon grass occurs in areas of lower salinity.

Attached to the seagrass leaf blades are numerous species of epiphytic algae and invertebrates. Together, seagrasses and their epiphytes serve as important food sources for manatees, sea turtles and many fish. The dense seagrasses also serve as shelter or nursery grounds for many invertebrates and fish.

St. Andrews Aquatic Preserve contains approximately 944 acres of seagrass beds, making up about 4% of the natural communities present in the aquatic preserve.

The St. Andrew Bay Resource Management Association conducted seagrass monitoring in the aquatic preserve (as well as other areas of St. Andrews Bay) from 2000-2010. A statewide FWC Fish and Wildlife Research Institute report stated that from 1992-2003, seagrass cover had increased throughout the bay. However, tropical storms in 2004 and 2005 along with increasing watershed development may have impacted seagrasses since the last mapping effort . 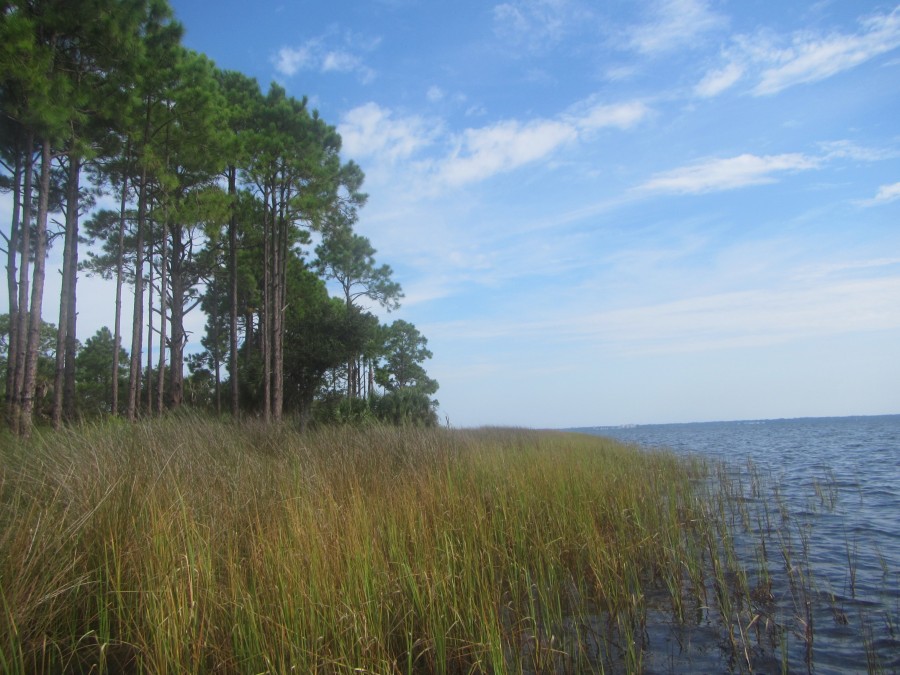 Salt marshes are expanses of grasses, rushes and sedges along coastlines of low wave energy and river mouths. The area just inside the border of St. Andrews Aquatic Preserve contains 15 acres of salt marsh, making up less than 1% of the natural communities present in the aquatic preserve, but more extensive marshes are immediately adjacent. Most of the salt marsh occurs on the bay side of Shell Island over much of the length of the island, and it is in good condition.

Black needlerush (Juncus roemerianus) and sawgrass (Cladium mariscoides) dominate this community. The salt marsh community on Shell Island declined following the hurricane activities of 2004 and 2005 due to an influx of saltwater and overwash throughout the island. Many of these areas are now beach dune or coastal grassland habitat due to sand migration and the subsequent increase in beach elevation that no longer succumbs to tidal inundation.

The distribution, abundance and condition of algal beds in St. Andrews Aquatic Preserve is unknown at this time.

The location of major beds must be determined before this natural community can be managed adequately. Existing state dredge-and-fill laws provide specific protection for marine and estuarine seagrass beds but not for algal beds. The correction of this deficiency could prove to be the most effective management tool available.

The primary threat to marine and estuarine algal beds are dredging and filling activities that physically remove or bury the beds. Other damage occurs from increased turbidity in the water column, which reduces available light; pollution, particularly from oil spills; and damage from boats.

The distribution, abundance and condition of sponge beds in St. Andrews Aquatic Preserve is unknown at this time. Management considerations include locating all true sponge beds within the aquatic preserve and providing protection for them from external degradation. Primary threats to sponge beds include siltation from beach renourishment or beach restoration projects; anchor damage by nautical craft; trawling by commercial anglers; collection for tourist-oriented trade; and water pollution, particularly oil spills.

Consolidated substrates are solidified rock or shell conglomerates and include coquina, limerock or relic reef materials that lack dense populations of sessile plant and animal species. These communities may be sparsely inhabited by sessile, planktonic, epifaunal, and pelagic plants and animals but house few infaunal organisms (i.e., animals living within the substrate). The distribution and abundance of consolidated substrate in St. Andrews Aquatic Preserve is unknown at this time.

Unconsolidated substrates include coralgal, marl, mud, mud/sand, sand or shell. This community may support a large population of infaunal organisms as well as a variety of transient planktonic and pelagic organisms (e.g., tube worms, sand dollars, mollusks, isopods, amphipods, burrowing shrimp and an assortment of crabs).

The condition of this community within the adjacent St. Andrews State Park is considered to be excellent. Generally fine sugar-white sand is the major constituent on the gulf side of the park. Many renourishment activities have been used to abate erosion of the state park’s mainland beach.

In particular, areas with open access from the beach dune habitat or marine unconsolidated habitat are important foraging areas for shorebird broods (i.e., with flightless young) at low tides.

Composite substrates consist of a combination of natural communities such as “beds” of algae and seagrasses or areas with small patches of consolidated and unconsolidated bottom with or without sessile floral and faunal populations.

The distribution, abundance and condition of composite substrate in St. Andrews Aquatic Preserve is currently unknown. Combinations of consolidated and unconsolidated substrate components, like those likely found in St. Andrews Aquatic Preserve, offer the greatest opportunity for diversity and should be high priority areas for protection. Management requirements are negligible providing the composite community is adequately protected.

Protection efforts will vary slightly based on components of the composite substrate community. Generally, degradation of physical and chemical water quality parameters should be prevented, as well as mechanical disturbance from anchoring, dredging, trawling and similar activities.