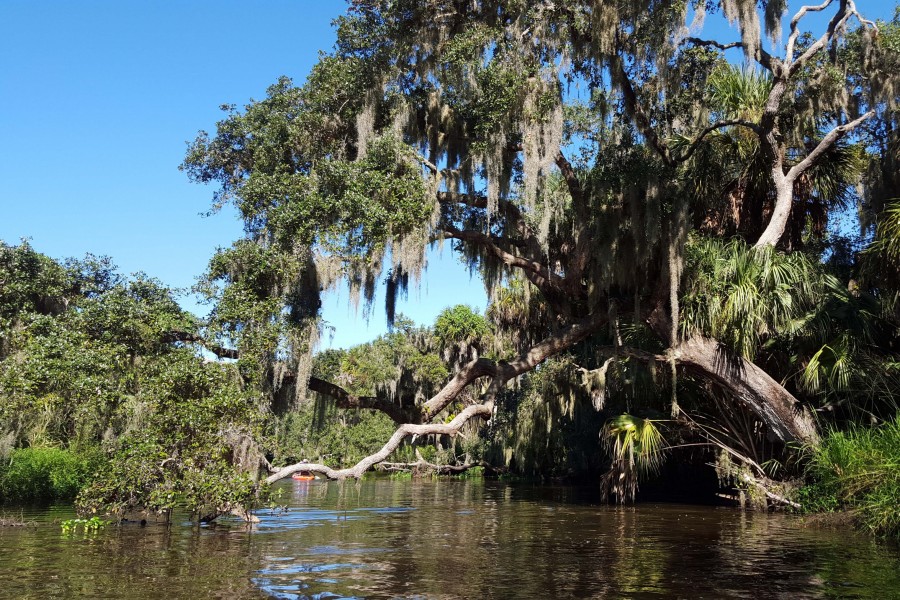 Situated on either side of the Sunshine Skyway, the aquatic preserve is central to the Bradenton/St. Petersburg/Tampa area. The aquatic preserve's northern boundary begins just south of the mouth of Little Redfish Creek at Port Manatee. The southern boundary lies between the mouths of Terra Ceia Bay and the Manatee River at Emerson Point on Snead Island. The boundary extends northwesterly from these points out to the Manatee-Hillsborough county line and the Intracoastal Waterway, respectively, which then crosses and forms the outermost corner of the preserve.

With the exception of the city of Palmetto and the Palmetto Point subdivision, most of the adjacent uplands are within the Terra Ceia Florida Forever project. Bishop Harbor, Clambar Bay, Williams Bayou and the Terra Ceia River are bordered by state-owned uplands. Palmetto is the only incorporated city bordering the aquatic preserve. 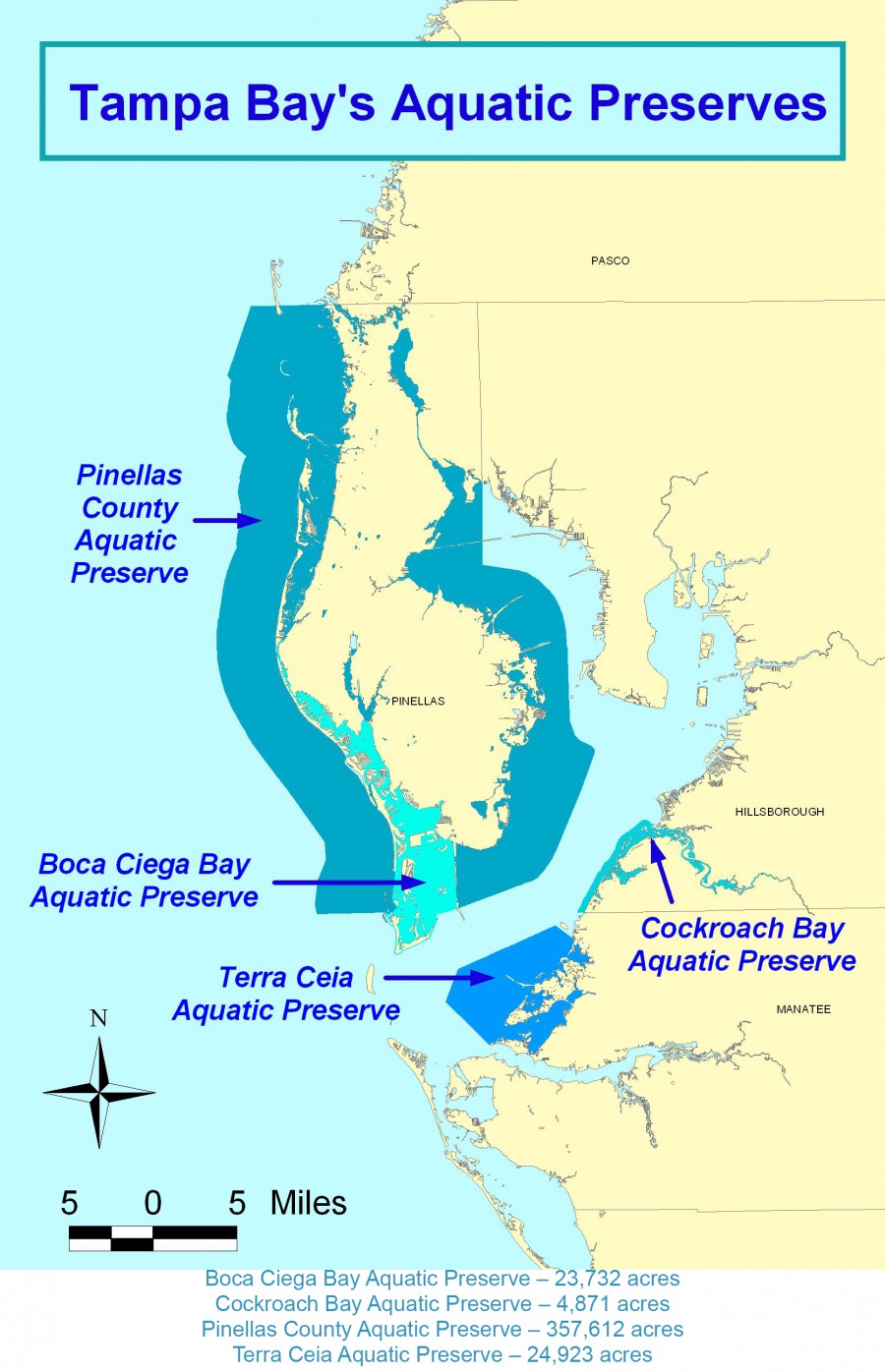 By virtue of its location along southeast Tampa Bay, Terra Ceia represents much of the remaining undeveloped shoreline of one of Florida's most densely populated watersheds. With increasing urbanization, it is becoming more important that residents and visitors be able to drive a short distance down I-75 or I-275 and experience Tampa Bay in its natural state. For many, visiting the Terra Ceia area is like stepping back in time to experience the natural beauty that attracted early settlers to the Tampa Bay area. Such experiences create a public appreciation for the natural functions of ecosystems that do so much to provide clean water, clean air and abundant seafood for people.

The aquatic preserve contains a considerable amount of Tampa Bay's seagrass and much of the bay's hardbottom acreage. As a temperate/subtropical climatic transition zone, the area provides a natural workshop for the study of effects of climate change and urbanization that is yielding science-derived information of gulf-wide significance. This site provides a unique opportunity to study the effects of climate change regarding genetic adaptation, diversity, interaction, dominance shifts due to parasite/disease interaction, and changes in reproduction trends.

Terra Ceia Aquatic Preserve was designated as an Outstanding Florida Water on May 22, 1986.

The earliest archaeological evidence of human use of the Terra Ceia Aquatic Preserve area dates to about 8,000 B.C. and was recovered from spoil dredged from Terra Ceia Bay. Subsequent aboriginal occupations produced shell middens and mounds dating from 500 B.C. to the late 1400s. Sixteenth-century explorers including Narvaez and Desoto found the Tampa Bay region settled by the Tocobaga, Pooy, Uzita, Yagua and Neguarete Indians.

After the virtual extinction of the Florida natives by the mid-1700s, Creek Indians from Georgia and Alabama, who later became known as Seminoles, moved south into the state, and the Tampa Bay area saw limited use as their hunting territory. Even though most of their operations centered on Charlotte Harbor, Cuban fishermen also established seasonal, shoreline camps around Tampa Bay.

Under the Armed Occupation Act of 1842, homesteaders began to claim the land in the area south of Fort Brooke (Tampa). Arriving on April 12, 1843, by way of Tampa, Joseph and Julia (Madam Joe) Azeroth, along with their daughter Eliza, established a claim on Terra Ceia Island not far from the camp of Miguel Guerero, a Cuban fisherman after whom Miguel Bay is named. They were the first permanent settlers on Terra Ceia Island. By the 1880s, farming was well-established in the area. The majority of the uplands surrounding the aquatic preserve were historically farmed for vegetable and citrus crops and were later the birthplace of the Florida gladiolus flower industry.

In the late 1880s, pebble phosphate deposits were discovered in the Peace River, then later in Polk County. Phosphate shipment became a major economic focus and an incentive for construction of both railroad and port facilities. In 1966, Borden Chemical Co. constructed the now defunct Piney Point phosphate plant.

In 1969, a 40-foot-deep channel was extended from the Tampa Bay shipping channel to Port Manatee. This channel separates the Terra Ceia and Cockroach Bay aquatic preserves.

Public-use management focuses on providing public recreational opportunities that are compatible with resource management objectives. There is one boat ramp and two paddle-craft launches.

Like most estuaries, Tampa Bay is a product of the fluctuations in sea level caused by glaciation. During times of lowered sea level, the river valley of Tampa Bay was cut into underlying limestone by its tributary rivers. As sea level rose during glacial retreat, the area was flooded and became Tampa Bay. The geomorphological landscape of Terra Ceia is a classic karst coastal terrain. Submerged lands and uplands are punctuated by sinkholes from past times when lower groundwater levels encouraged active karst processes.

As part of Tampa Bay, Terra Ceia Aquatic Preserve is characterized by the inlets and embayments of a drowned shoreline. The preserve has open water, several inlet bays, and tidally influenced creeks and rivers. Inlet bays include Bishop Harbor, Miguel Bay and Terra Ceia Bay. Adjacent to Bishop Harbor, two additional inlets can be found: Williams Bayou and Clambar Bay. Miguel Bay is formed from the mainland and Rattlesnake Key. The largest inlet, Terra Ceia Bay, is bisected by the U.S. 19 bridge.