"A trip on the Yellow River is like going back in time.
Its tall-forested banks, pristine water quality and productive fishing create a place one can go to be completely surrounded by nature.
The Yellow River Preserve is one of Florida's most precious contributions it has for its future generations."
- Ernie Rivers, River Keeper and Bream Fisherman Associate of Northwest Florida 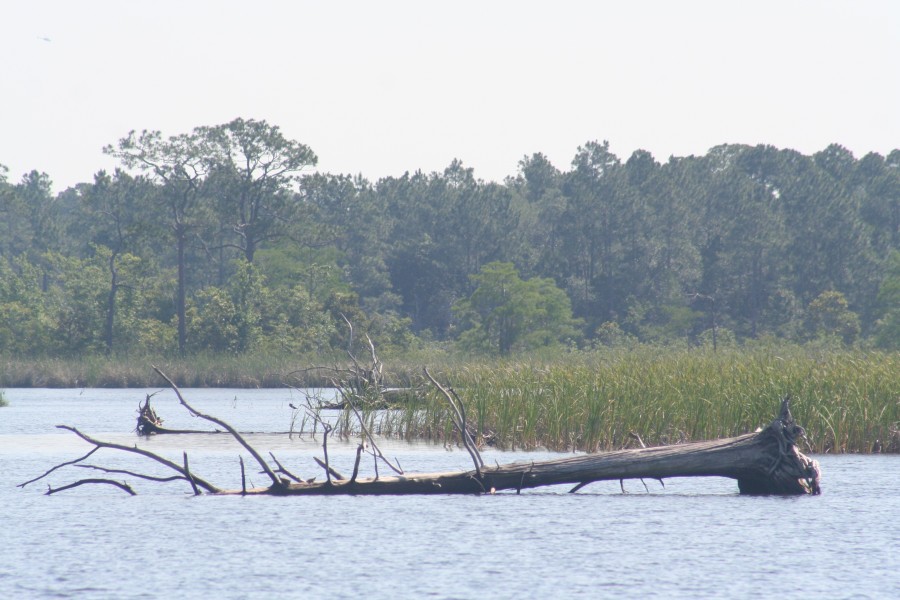 The loss of shoreline along Yellow River Marsh Aquatic Preserve is generally the result of increased erosion due to wave energy amplified by coastal armoring on either side. Within the past 10 years, 80 feet of shoreline has been lost, resulting in severe coastal flooding of a coastal pine flatwood forest. The restoration of this coastal transition zone will provide room for habitat migration with sea level rise and is a focus of the resource management program.

The project places vertical oyster reef structures along approximately 1,000 linear feet of shoreline to reduce the wave energy and is expected to grow an established living oyster reef that would enhance habitat and emergent vegetation within the aquatic preserve. Staff are also pursuing other projects to address the gradual decline of estuarine habitat in the aquatic preserve

Staff conduct education and outreach programs through participation in local events, such as the Seagrass Awareness Festival, and working with the schools by visiting or conducting field trips.

Staff conduct monitoring programs of gulf sturgeon, the gulf saltmarsh snake, diamondback terrapins and several other species of concern. Since the Deepwater Horizon oil spill, focus has shifted toward water quality monitoring and sedimentation. The staff also has worked with researchers from the University of Northwest Florida and the U.S. Environmental Protection Agency.

Yellow River Marsh Aquatic Preserve encompasses about 11,000 acres of the Yellow River, Blackwater Bay and East Bay in the western Florida Panhandle. This aquatic preserve was designated in 1970 for the primary purpose of preserving the biological resources in the area and maintaining these resources in an essentially natural condition.

This nearly pristine aquatic preserve is fringed by forested wetlands, marshes and submerged grasses that provide food and habitat for numerous species of wildlife.

Eglin Air Force Base and the Northwest Florida Water Management District manage almost half of the uplands adjacent to the aquatic preserve, which help buffer impacts to water quality.

Yellow River Marsh Aquatic Preserve is remote, offering excellent recreational opportunities, but few facilities to support these activities. The most popular activities are birdwatching or other types of nature appreciation, kayaking and canoeing, boating and fishing. Yellow River Marsh Preserve State Park has a small parking area, a gazebo and a short trail, but no access to the water. There are boat ramps along the Yellow River, which is a designated paddling trail. The river borders Eglin Air Force Base, which maintains several primitive launches and recreation areas. Be sure to obtain a base recreation permit if you plan to use these, including stopping for lunch.

The aquatic preserve is rich with archaeological history, varying from prehistoric (Native American) to historic (Spanish and American). Most of the prehistoric activity was from 5,000 years ago until approximately 1700 A.D. The historic period included Spanish settlers who first came in 1528, and American activity such as the Civil and Spanish-American Wars. There is one known shipwreck in the preserve, which is thought to be the city of Tampa, an early 20th-century passenger vessel used to ferry workers from Pensacola to the Blackwater Bay lumber mills.

There are also remnants of two sawmills off Robinson Point and Bay Point from this same time period.

The aquatic preserve contains different types of forested wetlands, and there are extensive marshes at the mouths of Yellow River and Weaver River that transition from estuarine tidal marsh to freshwater marsh. Continuing into the bay, the aquatic preserve includes seagrass beds and other benthic communities.

Wet flatwoods have a somewhat open canopy of scattered pine trees (Pinus spp.) with either a thick, shrubby understory and very sparse ground cover, or vice versa. During the rainy season, water accumulates on the surface, inundating the flatwoods for one or more months per year. An estimated fire return interval of three to 10 years is needed to inhibit succession to a more hardwood dominated forest. The wet flatwoods of Yellow River Marsh Aquatic Preserve are in mostly good condition with some of the denser areas in current need of fire application. These areas have minimal acreage, and much of the adjacent managed lands are also in need of fire. These locations may be added to the planned burn list from other management agencies.

Wet prairie is an herbaceous community, typically dominated by dense wiregrass (Aristida stricta var. beyrichiana), found on continuously wet, but not inundated, soils. Wet prairies in northern Florida are some of the most diverse communities in the United States, with an average of more than 20 species per square meter in some places and more than 100 total species in any given stand.

An estimated fire return interval of two to three years and little soil disturbance are necessary to maintain wet prairies. In the absence of fire, shrubs and trees invade and shade out the herbaceous species. Small alterations to the soil surface in wet prairies can permanently alter the hydrology, causing major changes in species composition which may require expensive restoration to repair. Wet prairie in Yellow River Marsh Aquatic Preserve remains in good condition.

Floodplain swamp is a forested, permanently or frequently flooded community adjacent to stream and river channels and in depressions and oxbows within floodplains. The canopy is generally dominated with trees such as bald cypress and tupelo, and may contain other trees, to a lesser extent, that are able to withstand frequent inundation. Floodplain swamp communities provide important wildlife habitat, contribute to flood attenuation, and help protect the overall water quality of streams and rivers. Floodplain swamp and other wetland forested mixed areas in Yellow River Marsh Aquatic Preserve are in good condition with little development or alterations. Several invasive species have been notated within or adjacent to aquatic preserve boundaries.

Floodplain marsh is a wetland community occurring in river floodplains and dominated by herbaceous vegetation and/or shrubs. Most floodplain marshes are freshwater (salinity less than 0.5 parts per thousand); however, saltwater may influence marshes near the mouths of rivers (freshwater tidal marsh variant) (FNAI, 2010), such as the case in Yellow River Marsh Aquatic Preserve. This natural community in Yellow River Marsh Aquatic Preserve is in good condition and receives adequate water fluctuation to maintain hydrology.

Two principal marsh plants, salt marsh cordgrass and black needlerush, range throughout Florida and are found in Yellow River Marsh Aquatic Preserve. Cordgrass is found where marsh is flooded almost daily, and needlerush is found where the marsh is flooded less frequently. One rare plant, beaked spikerush, and one rare reptile, the Gulf saltmarsh snake, are found in salt marsh in the aquatic preserve. Key bird species found in salt marsh of Yellow River Marsh Aquatic Preserve include the Louisiana seaside sparrow, which depends on the marsh throughout its entire life cycle, and the marsh wren, which relies on the marsh for breeding grounds. Additional bird species that frequent salt marsh habitat within the aquatic preserve include the black rail, tricolor heron, white ibis and little blue heron.

The condition of this natural community is good, but the sedimentation is an issue, particularly to other natural communities such as seagrass beds and mollusk reef. This sedimentation could be minimized with additional funding for paving of roads. The addition of shell to the system has been beneficial in recent years and will continue to provide suitable substrate for oyster growth.

Seagrass beds mostly occur in subtidal zones, in clear, coastal waters where wave energy is moderate. The species of seagrass that occurs in Yellow River Marsh Aquatic Preserve is widgeon grass. It can survive in a wide range of salinities giving it a broad aquatic distribution. Many of the bayous along the eastern boundary of the aquatic preserve are abundant with widgeon grass and provide essential habitat to a variety of ecologically, recreationally and commercially important species.

A similar type of submerged aquatic vegetation in Yellow River Marsh Aquatic Preserve is tapegrass (also known as eelgrass). It is not a seagrass, as it is a freshwater plant. Due to the freshwater output from Yellow River, large patches of tapegrass can be seen in this mostly estuarine system. The tapegrass in Yellow River Marsh Aquatic Preserve is in good condition with excellent coverage, minimal prop scarring, and providing submerged stabilization around marsh habitat near the mouth of the Yellow River, as well as on the western boundary of the aquatic preserve.

In Florida, most mollusk reefs are generally restricted to estuarine areas and are dominated by the American oyster. Within the collage of the substrate, numerous other sessile and benthic invertebrates live among, attached or within the community. In Yellow River Marsh Aquatic Preserve, the most common are oyster drills, polychaetes, barnacles, blue crab and mud crab. Many fish frequently occur near or feed among the mollusk reefs in and around Yellow River Marsh Aquatic Preserve, such as gobies, killifish and striped mullet.

Mollusk reefs that are exposed during low tides are frequented by a multitude of shorebirds, wading birds, raccoons and other vertebrates.

Sedimentation and other factors have led to a decline in oyster reef acreage in Yellow River Marsh Aquatic Preserve. Once a highly productive community for Yellow River Marsh Aquatic Preserve and surrounding waters, there is focus for oyster reef restoration in subtidal and intertidal areas to bring back to historical conditions. Currently this natural community has minimal presence in the aquatic preserve.

Several intertidal and subtidal oyster bed restoration projects have been implemented, and more are planned.