"As the only deep-water harbor between Tampa and Key West, greater Charlotte Harbor is blessed with a rich abundance and diversity of marine life and requires our constant and continued efforts to ensure the future health of its waters."  -- Anna Bowditch, Honorary Member of the Charlotte Harbor National Estuary Program Advisory Committee 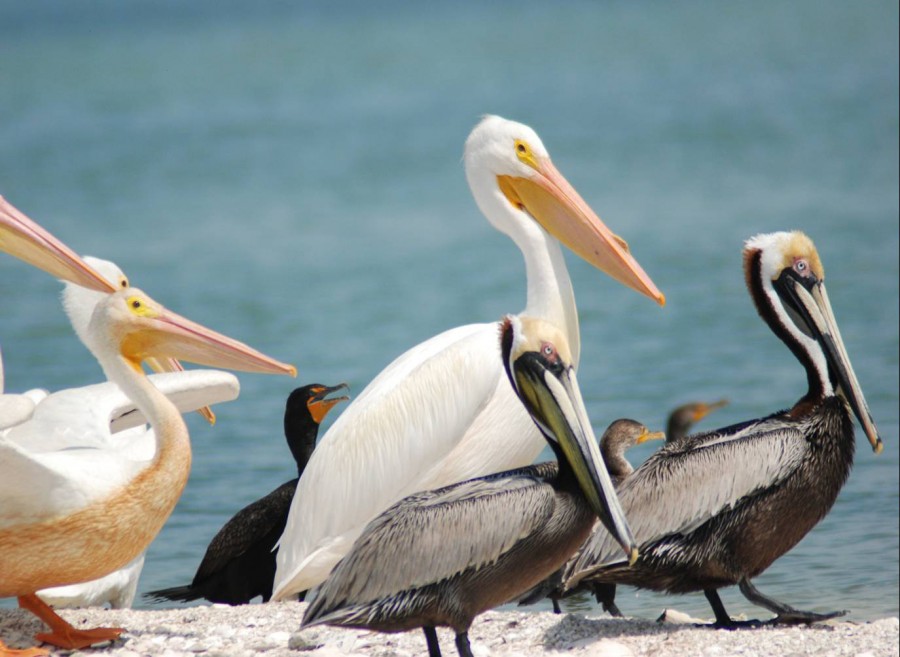 Charlotte Harbor is the second-largest estuary in Florida and the largest, deepest and most diverse of the five Charlotte Harbor Aquatic Preserves. Fresh water from the Peace and Myakka rivers mixes with salt water coming through Boca Grande Pass from the Gulf of Mexico.

Annual seagrass monitoring at 20 different sites in the Gasparilla Sound-Charlotte Harbor Aquatic Preserve examines types, density, distribution and other parameters. Seagrass abundance varies significantly but generally appears healthy and diverse. Gasparilla Sound contains some of the most dense seagrass beds in the complex. 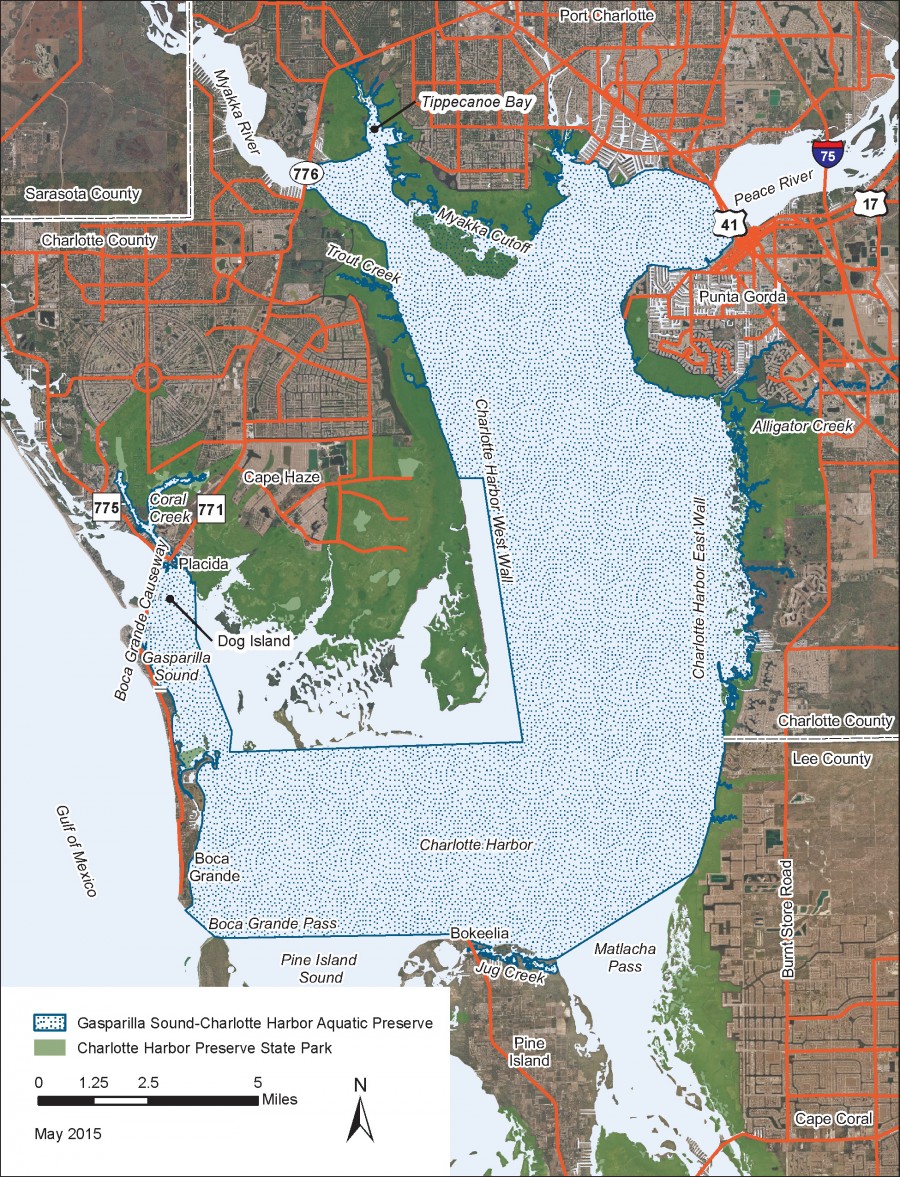 Aquatic preserves staff and volunteers routinely monitor water quality and natural resources in the bay, such as seagrasses and nesting birds. Ongoing programs include:

Learn more about the aquatic preserves by visiting the Friends of Charlotte Harbor website.

There are hundreds of historic or archaeological sites recorded in the Florida Master Site File within or immediately adjacent (i.e., within 50 meters or 164 feet) to CHAP, most of which are within CHAP boundaries. However, much of the area has not been surveyed, and it is expected that there are still unrecorded sites located along the coastline of the uplands, on islands and in inundated areas.

These historic sites include Native American and European encampments, villages and shipwrecks, along with prehistoric shell kitchen middens.

While there are many recorded sites, the prehistoric cultural sequence for the coastal areas around CHAP is still not completely understood, particularly the earlier pre-ceramic occupations. Part of the problem centers on the fact that there has been an overall 30- to 50-meter rise in sea level in the past 10,000 to 12,000 years.

The majority of the coastal sites from these earliest periods lie drowned on the bottom of the Gulf of Mexico and the extensive bay system of the aquatic preserves.

Perhaps the most impacted natural habitat type in CHAP, are expansive concentrations of sessile mollusks (usually the Eastern oyster in Florida) occurring in intertidal and subtidal zones to a depth of 40 feet, and are typically referred to as oyster reefs or oyster beds. Oyster reef habitat provides numerous ecosystem services. They are essential fish habitat. They also bio-assimilate nutrients, filter water, reduce turbidity and stabilize shorelines among numerous other functions.

Tolley, Volety, and Savarese (2005) studied the resident communities of oyster reefs in the Caloosahatchee estuary and identified 10 species of decapods and 16 species of fish living on the oyster reef. At least 90% of oyster reef habitat in the Charlotte Harbor region is estimated to have been lost as a result of dredging, mining for road beds, hydrologic changes and harvest (Boswell, Ott, Birch, & Cobb, 2012).

These occur in the portion of the coastal zone affected by tides and seawater but are protected from large waves either by the broad, gently sloping topography of the shore, by a barrier island, or by location along a bay or estuary. The width of the intertidal zone depends on the slope of the shore and the tidal range. Salt marshes may have distinct zones of vegetation, each dominated by a single species of grass or rush.

Flooding frequency and soil salinity are the two major environmental factors that influence salt marsh vegetation; saltgrass (Distichlis spicata), needle rush (Juncus spp.) and saltmarsh cordgrass (Spartina alterniflora) all tolerate a wide range of salinities. Cordgrass is found where the marsh is flooded almost daily, whereas needle rush and saltgrass are found where the marsh is flooded less frequently. In Charlotte Harbor, as in all of South Florida, salt marshes generally serve as a transitional zone between mangroves and freshwater marshes. Salt marshes are present in CHAP but are found only in Lemon Bay, Gasparilla Sound-Charlotte Harbor and Pine Island Sound aquatic preserves. Mangroves typically outcompete salt marsh vegetation in the estuaries of Southwest Florida.

These swamps are dense, low forests occurring along relatively flat, intertidal and supratidal shorelines of low wave energy along southern Florida. Four species of trees are naturally found in mangrove swamps: red mangrove, white mangrove (Laguncularia racemosa), black mangrove (Avicennia germinans) and buttonwood (Conocarpus erectus). Birds utilize mangrove swamps as nesting habitat and fish use their roots as nursery grounds and as protection from predators. Mangroves also stabilize substrates and shorelines. More than 5% of CHAP is comprised of mangrove swamp, including most of the CHAP shoreline.

Threats to mangrove habitat include wide-spread trimming and removal, conversion to hardened shorelines, non-native vegetation and sea level rise. Coastal development including sea walls contributes to the loss of the mangrove shoreline and is most apparent in Lemon Bay Aquatic Preserve. Natural events such as hurricanes, including Hurricane Charley, also can affect mangrove swamps. Charley caused degradation of mangroves throughout CHAP in 2004. Although some mangrove islands were totally lost, most areas have recovered.

Brazilian pepper (Schinus terebinthifolius), carrotwood (Cupaniopsis anacardioides) and seaside mahoe (Thespesia populnea) are three non-native species that can be found within mangrove swamps. Red mangroves have been designated as an essential feature of sawfish critical habitat.

These are the most abundant, vegetated habitat type in CHAP. Seagrasses are not true grasses but are flowering plants (angiosperms) that live underwater. Like land plants, seagrasses produce oxygen and store carbon, which are two important functions. The depth at which seagrasses are found is limited by water clarity because they require sunlight; each species has specific light requirements, allowing some to grow deeper than others.

Seagrasses are a sensitive indicator of water quality and pollution in shallow coastal areas as they are vulnerable to various forms of anthropogenic stress. Seagrasses also are susceptible to scarring from boat propellors, anchors and trawls. While seagrasses will recolonize areas when water quality is good and disturbances are removed, re-vegetation of scarred areas may require many years. Reoccurring disturbances such as prop scarring and dredging can result in permanent seagrass loss.

These beds are characterized as dense populations of sponges. Although concentrations of living sponges can occur in marine and estuarine intertidal zones, sponge beds are confined primarily to subtidal zones. There are no currently mapped sponge beds in CHAP. Individual sponges occur sporadically throughout CHAP, and sponge beds may be present.

These substrates are expansive, relatively open areas of subtidal, intertidal and supratidal unsolidified materials that lack dense populations of sessile plant and animal species. This community may support a large population of infaunal organisms as well as a variety of transient planktonic and pelagic organisms. Furthermore, according to Schmid, unvegetated bottom with colonies of sessile invertebrates such as tube worms, tunicates, bryozoans and sponges (i.e., live bottom) has been identified as essential foraging habitat for the endangered Kemp’s ridley turtle (Lepidochelys kempii) in the coastal waters of west Florida. This community is known to make up most of the unclassified submerged bottom areas within CHAP. It is found not only in deeper waters such as channels but also in some of the shallowest and intertidal portions of the bay where seagrasses are not found.

The only mapped areas of unconsolidated substrate are tidal flats - areas of sand or mud that are unvegetated and cycle between being submerged and exposed with the change in tides.

Tidal flats make up less than 5% of CHAP but more than 10% of Cape Haze and Matlacha Pass aquatic preserves. During daylight hours, tidal flats serve as a primary feeding ground for numerous species of shorebirds and wading birds. During the night, fish, crabs and shrimp become the major consumers.

Primary producers of mudflats include diatoms, dinoflagellates, filamentous green algae and blue-green algae. While these areas can appear relatively barren, the densities of infaunal organisms in subtidal zones can reach the tens of thousands per square meter, making these areas important feeding grounds for many bottom-feeding fish.

These communities may be sparsely inhabited by sessile, planktonic, epifaunal and pelagic plants and animals but house few infaunal organisms (i.e., animals living within the substrate). Consolidated substrates are important in that they form the foundation for the development of other marine and estuarine natural communities when environmental conditions become appropriate. Consolidated substrates are not mapped in CHAP, but small localized areas are known and include areas along the eastern shoreline of Charlotte Harbor including Alligator Creek and Pirate Harbor.