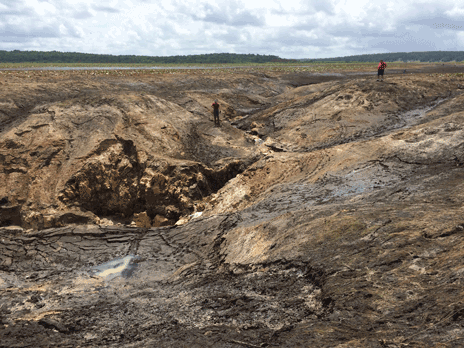 Lake Jackson in north Tallahassee is experiencing a dry down event, during which part of the lake naturally and cyclically drains into a sinkhole. The Porter Hole Sink, which is located near Faulk Landing, has drained fully seven times since June 2021. The sinkhole area is currently drained as of November 5, 2022, due to a lack of recent rain events and regional drought conditions. The episodic dry down has attracted many visitors who are curious to see this natural phenomenon.

If you are planning to visit Lake Jackson, please take precautions and stay safe. DEP has created an FAQ about the dry down. Faulk Landing has been a bird-watching hot-spot, particularly during the dry down. Naturalists can stay up to date on flora and fauna observations on eBird and iNaturalist. 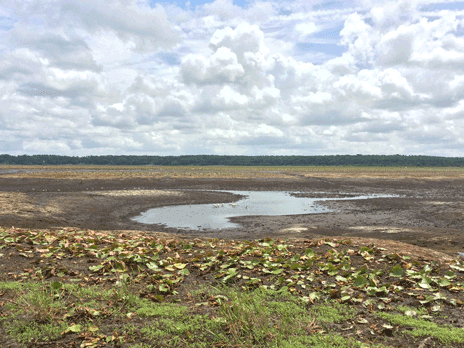 The sinkhole became visible once again early December 2021 through mid-January 2022. After a temporary filling, Porter Hole sink drained yet again for most of February. March 2022 rains increased the lake level by over a foot and the sinkhole remained covered with water until July 1, 2022. After 11 days of being dry in early July, Porter Hole was covered with water. However, a precipitation deficit that began in September has persisted through the fall, leading to the 7th draining in November, 2022. Future conditions may change rapidly at the sinkhole and across the lake depending on the frequency of heavy, local precipitation events.

Generally, lake levels have been trending downward over the last few years due in part to long-term regional drought conditions and lack of heavy, localized precipitation events within the lake’s basin that are needed to sustain lake levels. Lake Jackson maintains water levels through direct and indirect precipitation (runoff) within its 42 square-mile basin.

“Full pool” water level conditions are considered at approximately 86 feet above sea level (referenced to NAVD88). At the beginning of November, the lake level at the Miller Landing gauge reads at around 78.8  feet NAVD88. However, lake water elevation can be much lower in the Porter Hole Sink area because this basin becomes isolated (i.e., from Miller Landing area) during low lake level periods.

Currently, most of the sub-basins within Lake Jackson are holding varying amounts of water, providing refuge for wildlife (i.e., U.S. 27/Miller Landing, Church Cove, Crowder Landing, Meginnis Arm). Porter Hole Sink drained most recently in 1999, 2006 and 2012. Lime Sink, the other major sinkhole, last drained in 2000 but does not appear to be active currently.

Lake Jackson is internationally known for its unique hydrology and trophy largemouth bass and as an outstanding habitat for wading birds, waterfowl and a diversity of other wetland species.

Lake Jackson is located within the northern boundaries of the Tallahassee Hills physiographic region. This region covers a 25-mile-wide strip of upland formations spanning five counties in Northwest Florida from the Withlacoochee River to the Apalachicola River. The topography surrounding the lake has an elevation of 200 to 230 feet above sea level, and thus, the steep hills form the sub-basins that give Lake Jackson its shape. 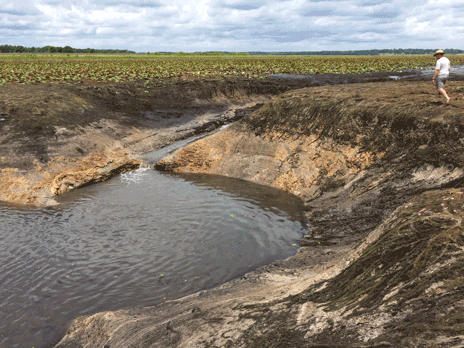 Lake Jackson is a shallow-water body that has an average depth of 6 feet except for two major sinkholes - Porter Hole Sink and Lime Sink - that have a localized depth of about 28 feet. The lake was formed through the dissolution of limestone over time causing the collapse of the overlaying sediment and forming the lake basin. Bottom leakage, sinkholes and swallets, long-term drought and a lack of heavy rainfall events can create conditions that contribute to low lake levels and slow draining.

In the last stages of a sinkhole draining, though, it can appear as if the lake dries within hours or days. Although the sinkholes are likely draining constantly, they can be partially or completely plugged with sediments and organic matter. The limestone, clay or organic matter plugs can collapse unpredictably when groundwater levels drop. As a result, lake water can funnel into the aquifer and dramatically lower the water level.

The lake can also fill up just as quickly as it had disappeared after large rainfall events because the lake lies within a hydrologically closed basin (42 square miles) and is directly impacted by precipitation.

Lake Jackson Aquatic Preserve was designated by the Legislature in 1973. 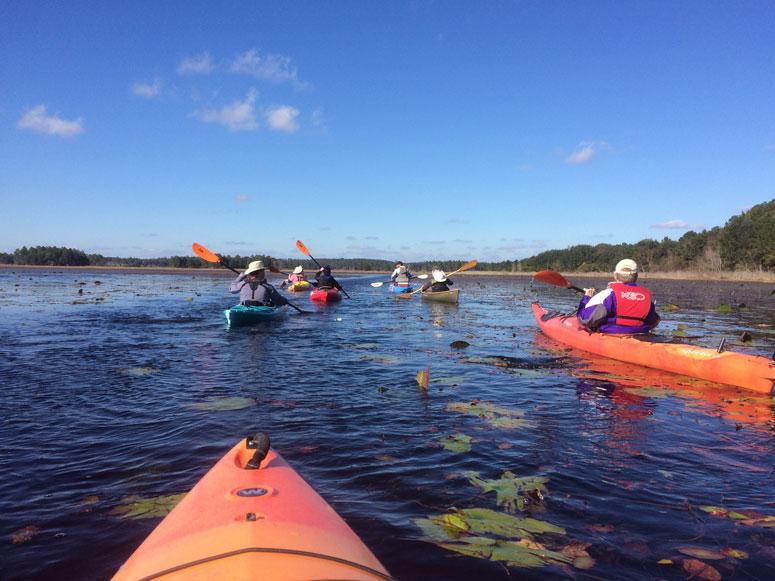 The lake is best explored by paddlecraft and boats or a spotting scope from one of the many landings. Outboard motorboats, mud motors and air boats are all used, depending on lake level.

There are nine boat landings that provide access to the aquatic preserve. Kiosks at each access point provide information and maps.

Lake Jackson is also a Designated Florida Paddling Trail as part of DEP’s Office of Greenways and Trails.

Lake Jackson has served as an important natural resource to communities long before its designation as an aquatic preserve in 1973. The Fort Walton Culture of 1200 to 1500 A.D. thrived in the early environmental setting of the aquatic preserve and surrounding areas. The remains of their ritualistic culture can be found at Lake Jackson Archaeological Mounds State Park.

The Southeastern Ceremonial Complex located in the park is evidence of an advanced community structure that existed around 1200 A.D. near Lake Jackson. The earthen mounds have been preserved to offer visitors the opportunity to look back through time into the area's rich cultural history. 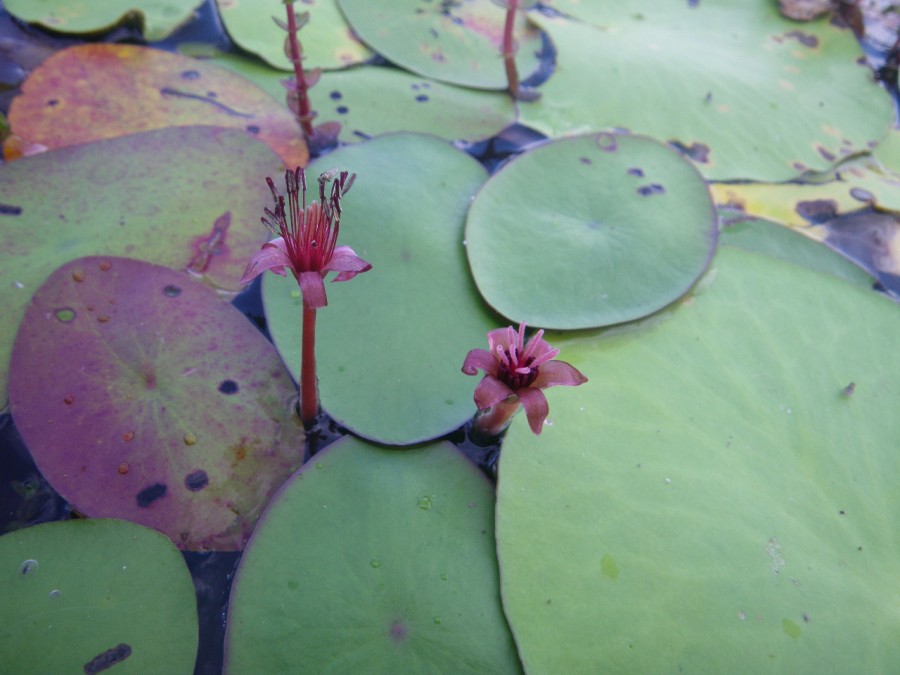 Clastic upland lakes are generally characterized as shallow to relatively deep, irregular-shaped depressions or basins occurring in uplands. They have surface inflows but are often without significant outflows. Water is generally dissipated through evaporation and transpiration, but it may also disappear through sinks that connect with the aquifer, especially during prolonged droughts.

The karst topography of North Florida produces numerous sinkholes from the dissolution of the underlying limestone. Lake Jackson has small to medium sinkholes scattered across the bottom. The lake's natural dry down and refill cycles are determined by the activity of these sinks and the amount of rainfall in the area. The sinkholes are important to the lake's ecosystem because natural periodic draining creates a cleansing effect for the lake, reducing invasive aquatic vegetation and exposing organic sediments that eventually decompose, revealing sand bottom habitat.

Wet prairies are communities of non-woody vegetation found on continuously wet but not inundated soils on flat gentle slopes. They are dominated by a mixture of grasses and sedges in the wetter portions. Wet prairies in North Florida are some of the most diverse communities in the U.S. with an average of more than 20 species per square meter. These communities are very sensitive to alterations to the soil surface that can alter the hydrology. Wet prairies are prevalent in the northern section of Lake Jackson near the "cattle gap." 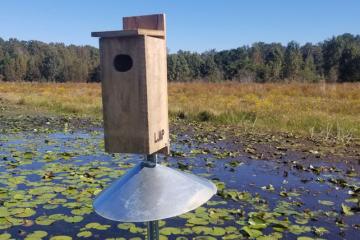 The fluctuating water levels within the aquatic preserve prevent the domination of any one invasive species but also create enough disturbance for some infestations to thrive. The lake's main threats are from hydrilla, water hyacinth, Cuban bulrush and Chinese tallowtree. Management is achieved by working closely with FWC’s Invasive Plant Management Section to mitigate their populations in both aquatic and riparian zones. Hydrilla is managed by herbicide treatment and sterile grass carp stocking.

Natural dry down events also knock back hydrilla populations in shallow areas, but infestations usually remain in the lake's deeper sections. Waterfowl also use hydrilla as a food source in winter. Other aquatic exotics are treated with appropriate types and amounts of herbicide. Chinese tallowtree infests lake buffer - or riparian - areas and is resilient to varying water levels once established. Intensive management of this exotic tree was initiated in 2020-21, targeting dense stands of mature trees with selective herbicide application. Long-term goals include replacing tallowtree areas with native tree canopy for increased nesting and foraging habitat for wading bird species.

The exotic island apple snail - originally from South America and a favorite food of the limpkin - is present in the lake and its population varies with lake levels. The snail’s impact on the native communities is currently unknown. Future monitoring and research projects are being considered to learn more about the snail’s population status in the aquatic preserve and potential management options.

The public can participate in a citizen science monitoring project by submitting photos at two Chronolog stations featured on the lake at Jackson View and Sunset landings.